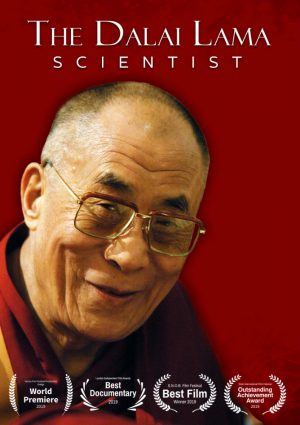 Imagining the 14th Dalai Lama explaining in a public forum that Buddhist followers should not accept religious teachings out of faith, but rather through investigation and experiment, may feel surprising.

Don’t religion and science typically clash? Yet, it makes perfect sense when viewing the documentary The Dalai Lama- Scientist, the latest film by Dawn Engle and Peacejam.  This film paints a surprising portrait of the renowned religious leader as he engages with scientists during the eighties, nineties, and the new millennium.

The film touches briefly on the Dalai Lama’s life as a young man, highlighting his constant curiosity, before moving on to his adult life and scientific discussions.  Right away, Engle and her filmmaking team bring viewers into conversations with the Dalai Lama that feel like conversing with a friend. The intimacy up front really helps pull the viewer into the more complex ideas that the rest of the film engages with.

The Big Bang, Physics, and Neuroscience are just a few of the topics covered here.  Conversations between the Dalai Lama and other scientists and audiences, recorded around the world, cast a very informative light on these dense topics.  Added graphics built around each topic help illustrate the complexities. But most importantly, viewers get to see the Dalai Lama’s thoughtful and wise personality on full display.  He absorbs new information, engages with scientists and audience members, and draws many profound connections between Western science and the religious teachings of Buddhism. And he does it all while adding humor and relatability to the discussions.  His curiosity really shines in this film and makes him very engaging. This made the film surprisingly refreshing and interesting to watch.

Additionally, the project displays growing friendships, forming between the Dalai Lama and the scientists he works with over the years.  This forms a strong emotional core that supports the heavy intellectual discussion. Footage of conversations, shots of embraces and laughter, and interviews containing statements of mutual love and respect convey the manner in which these friendships form over time.  The filmmakers let the footage speak for itself, which preserved the emotional truthfulness. And this also highlights the common humanity between people from different walks of life, a common humanity that informs everything the Dali Lama strives for in his explorations of science and preaching of peace.

Throughout his life, the Dalai Lama has searched for religious truth by exploring the sciences.

His curiosity as a young man stayed with him as he grew into his leadership role.

The Dalai Lama has engaged with many high profile scientists and audiences, always eager to learn and grow

Along the way, he formed many strong bonds of friendship.

The structure of this film makes sense and flows well.  The content pulls the viewer through the experience, and while there may be a few scenes near the end that diverge too much from the Dalai Lama’s story, overall it was still highly effective.

The visuals are cleanly captured.  The majority of the film consists of recordings of the Dalai Llama and other scientists holding public discussions.  While mostly standard in nature (save for a few impressive scenic shots), the shots lack flaws that would throw viewers out of the story.  The filmmakers utilize actual face-to-face interviews with the Dalai Lama and those close to him, which results in a very personal feel. There is a narrator, but it really feels like the added dialogue provides a subtle guideline, rather than taking over the film and simply “telling” the viewer instead of “showing”.  The filmmakers struck a great balance with all of this.

Finally, clear audio and well-employed music serve the film well.  The score feels subtle and supportive of the emotion on display, rather than over-manipulative.  I did notice an odd sound blip near the middle of the film, where it sounded like voices were talking over the narration and muddling it.  This didn’t feel intentional. However, I got past this and was happy to find that the filmmakers did a good overall job with production values.

I found the film to be engaging overall, and at times highly interesting.  The openness of the Dalai Llama during discussions, and the good editing decisions of the filmmakers kept me going the entire time.

With The Dalai Lama- Scientist, Dawn Engle and her team create a human portrait of a world-renowned leader.  Their display of his strong interest in and support of the sciences serves as an excellent example for others to live by, and will hopefully inspire many viewers to use their curiosity to make the world a better place.


9.0 – Worth renting, streaming and watching for educational purposes to generate discussion!