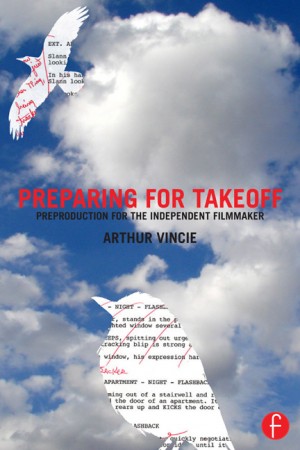 Many of us filmmaking types see ourselves as artists. We don’t want to spend time doing all the boring parts of pre-production – the re-writes, the budget, the legal stuff…Yawn! We just want to grab our camera and shoot the movie! Why worry about all that, we reason, I’m a talented artist – I can work it all out in the editing room!

Not so fast, says author Arthur Vincie. You may be the next Michael Bay or Christopher Nolan, but if you don’t plan everything – and he really does mean EVERYTHING – in pre-production, your artistic genius will probably never even make it to the editing room, let alone any kind of release. Vincie certainly has the experience to back up his claims – he has worked as line producer, production manager, director, and multiple other positions on films with budgets ranging from less than $200K up to $10 Million. So it’s safe to say he certainly knows what he’s talking about.

I’ll be honest, when the author started talking about business types, incorporation, and copyrights…my eyes started to glaze over. This type of thing generally doesn’t interest me. I’m an artiste after all! (insert snobby French accent here.) However, Vincie not only clearly knows all about this stuff that people like me should care about, but he actually explains it in a way that people like me can understand! What is an EIN? I didn’t used to know before I read this book, but now I do! And – extra bonus points – I know why you need it and how to get one!

One thing I really love about this book is that it is more than just a large collection of advice, but it is very cleverly broken down into “paths.” There are three chapters for the director to focus on: script analysis, gathering materials, and casting preparation. And even more for the producer to sort out: script revision, budgeting, vendors, equipment, unions, and contracts. Then several more chapters that the two have to work together on: casting, hiring the crew, location scouting, organization, previsualization, and rehearsals. I have never seen a film book arranged this way, but it could be valuable information any filmmaker might need. After all, everyone can define what a director does – that’s all the fun stuff. But a producer?

There is a WEALTH of information within this book. Since I’m a visual person, I especially love all the tables and diagrams. There’s a chart of the hierarchy of a film shoot, lists for casting, and plenty of tables for dealing with the budget!

There is a lot of information in this book…and that’s kind of a good and a bad thing. Being ADHD, I get information overload pretty easily, so I had to put the book down and come back to it several times, especially when it gets into the topics that tends to make my eyes roll back – contracts, legal stuff, business-y things…

But in all seriousness, this stuff is important for filmmakers. It’s better to inch your way through a book like this and absorb everything than speed-read and miss the crucial parts. I’d suggest having a pen and notebook on hand to take notes, as well as a highlighter or – even better – Post-It notes or tabs to mark important pages and sections, without permanently marking the book.

My favorite chapter in this book is the one entitled, “Working with other people,” because, let’s face it, that’s generally a big sticking point for us artistes and our vision. Even as I went back through the book to write this review, I found things I’d missed in the first run-through.

Oh, and did I mention that the book’s website has sample budgets, schedules, preproduction charts and forms? Plus a bonus “not-included-in-the-book” chapter? I would probably be safe in saying that a filmmaker could – and probably should – re-read this book before starting any project.

The information contained in this book used to be hard-won through a series of expensive and/or humiliating failures. It’s kind of a no-brainer to shell out $25 for the book instead of thousands on a failed film. (Such as the first feature film I worked on with the now editor of MFM! But, hey, we don’t hide our mistakes—we create magazines to help others avoid making them themselves!)

When someone talks about becoming a filmmaker, I often encourage people to check books out from the library first, especially since money is tight for us as microfilmmakers. But this is one you just need to pull the trigger on. Not only could this book potentially be the difference between a flop and a success, its information can be used again and again. (If you’re still unsure, check out the charts on the website and read the sample chapter. There’s also a Facebook and Twitter page. Seriously, read them.)

At the beginning of the book, Vincie has this to say about poorly-planned films that fizzled: “My fellow line producers and I joke about them over beers. But it’s really no joke. Someone lost a small fortune – anywhere from a few thousand to a few million. Bridges were burned. In some cases, people were stiffed (I’ve been among them.) Potentially promising careers were dashed. All because the director and/or producer didn’t take the time out before the shoot to really think through what they were doing.”

Who wants to be lumped into that category? I don’t.

The author of half a dozen screen plays, two novels, and a proficient camera-woman in her own right, Monika DeLeeuw-Taylor is Microfilmmaker's lead writing analyst and one of our top film critics. When she's not writing a critique for Microfilmmaker, she's writing novels and screenplays. Most recently, she helped produce on Viking Productions' Depleted: Day 419.