Categories
Pages
Home » Articles » How to Shoot a Fantasy Series »

How to Shoot a Fantasy Series

Director of photography Neil Oseman was nominated for six Best Cinematography awards for his work on the indie fantasy series Ren: The Girl with the Mark. Here he explains his approach to lighting the series. 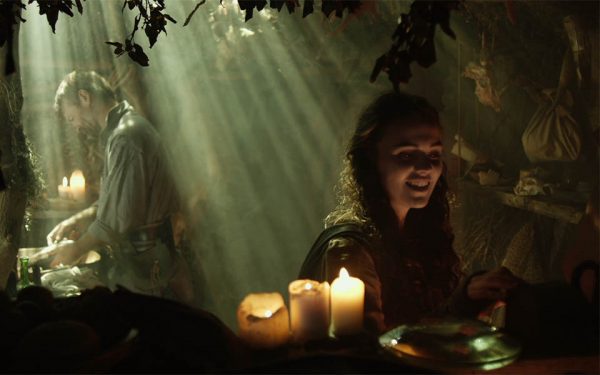 The Sun and the Moon

As director of photography on Ren: The Girl with the Mark Season One, it was my job to achieve a high technical and creative quality for the show’s images. This meant selecting equipment and collaborating with director Kate Madison to determine the camera angles and movements.

But perhaps the biggest part of the DP’s job on set is to design the lighting. This is particularly challenging when dealing with a period or fantasy piece, where the only sources of light would realistically be the sun, the moon or flames.

Season One was set mostly outdoors in daylight, so often we were in the hands of Mother Nature, at least for wide shots. Once the camera moved closer, however, I was able to mould the light to help define the characters. I gave Ren, who is young and innocent, an even, shadowless look by placing a reflector under her face whenever possible. I wanted a more contrasty, mysterious look for tougher characters, so I often used an LED panel to give Karn or Lyanna a hard side-light, and let Hunter’s eyes fall into shadow.

For night exteriors, like those in the forest which open the series, or the closing moments in the village, I adopted a classic cinematic approach. I placed our largest lamp, a 2.5KW HMI (arc light), at the rear of the scene to backlight everything with “moonlight”. I then peppered pools of light where necessary to highlight the action. 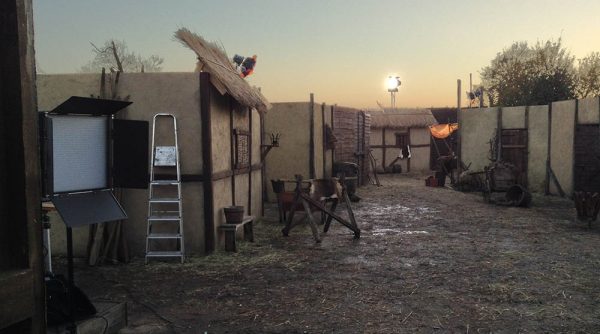 As the sun sets, lights are in position on the village set for a night scene, including a 2.5K HMI right at the back

Motivation is key in film lighting. Any light I set up should represent a realistic source of light coming from a believable direction. This meant collaborating with designer Christopher Dane and other members of the art department to position braziers, candles or windows where they would best light the cast. For example, when the Master and his archers open fire on the fleeing Ren and Hunter in the season finale, the braziers in the street have been carefully positioned and then supplemented by powerful electric lights just off camera.

The fire in Ren’s living room was almost entirely created with artificial light. Apart from a few close-ups, the off-camera fire was an 800W lamp. By bouncing the light off a gold reflector, wiggled continuously by one of the crew, a convincing firelight effect was achieved. In other scenes, small but powerful spotlights or hidden rows of 100W bulbs on dimmers simulated candlelight.

Texture and Shafts of Light

Of course, the main light source in any indoor daytime scene is sun shining through windows. As already mentioned, sources should be believable, but in a fantasy show there is a certain amount of dramatic license. So the angles of the “sunlight” shining in are not always in keeping with the time of day, but rather I chose them to produce the most magical effect.

Usually I supplemented the hard sunlight with softer, indirect “daylight” simulated by a Kino Flo, a bank of fluorescent tubes specially coated to give an accurate daylight colour. This approach allowed me – with the addition of smoke – to get a hot shaft of hard light that would be a strong graphical element in the image and give a definite fantasy feel, but at the same time illuminate the cast’s faces with a softer, more flattering light. As Ren argues with her father in episode two, for example, the detail in the set and costume is brought out by the harsh, raking “sunlight”, while from the neck up she is lit only by the softer light.

Ren (Sophie Skelton) is lit by a hard HMI ‘sun’ through the window, a soft Kino Flo above the window, and an 800W tungsten lamp bounced off a gold reflector to simulate a fireplace

Raking light, a.k.a. cross-light, is a crucial technique in period and fantasy cinematography. If you go far enough back in history, there were no smooth surfaces; everything was rough and textured. By cross-lighting a surface you bring out all those imperfections and help the set, prop or costume to look authentically old. Similarly, smoke helps to age the scene by lowering contrasting, adding texture and diffusing the image.

We are currently running a Kickstarter to fund new episodes of Ren, and I look forward to many exciting possibilities for the cinematography. In the intervening years, camera sensitivity has progressed to the point where scenes can be lit only by real candlelight – as seen in the BBC’s Wolf Hall, for example. Our characters will progress too, calling for different lighting approaches to reflect who they will become, and of course a whole new array of locations will be visited, each requiring its own style of lighting to give it character too.

Although fantasy lighting is limited by the types of sources you can use as motivation (sun, moon, fire) it can be incredibly creative for a cinematographer. Use smoke and cross-light to create texture, place your candles and braziers carefully to best light the cast, punch hot shafts of sun through the windows, and always remember characterisation when lighting faces.