Day ten of this crazy, micro-budget, desert rat, filming adventure for my film ‘Dead Weight’. It’s a big one. Lots to shoot. Two different locations. A hike is involved. Straight up the mountain. Yes, it will be ambitious. 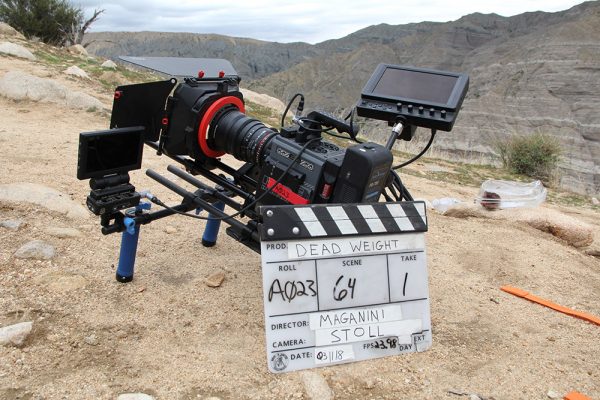 Actor-Man and I are filming the top-of-the-mountain scenes near the end of my film. It’s 45 minutes of a relatively easy stroll as far as mountain hikes are concerned. No sweat, I think.  The crew isn’t too thrilled. I keep saying, “just a little longer, just up ahead”. But “just up ahead” keeps not coming up.

I pick the wrong conversation topic and realize it too late. “Did you know there’s wild feral dogs running through these hills? They’re like savage wolves, really. Oh yeah. And feral cows and bulls. I’ve heard they charge people.” Yeah, not really what they needed to hear.  It doesn’t help that we see splatted bull dung patties everywhere. Shit threats. A kind of “this is my territory and you’re trespassing at your own risk” message. Every time I see one of the menacing piles, my heartbeat kicks up a notch and I sneak a look around.

Finally, a nice area near the top. No sign of feral bulls. Except for the ever present dung patties. This will do. It’s not quite the place I wanted. That’s a bit further up. But judging from the looks of the crew, this had better be it. So I say, “this is it.” We plop down for a break before setting up. 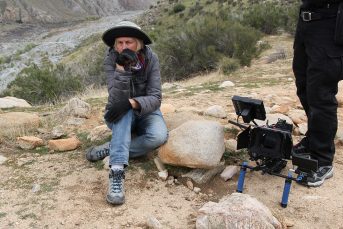 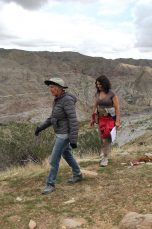 OK. Time to gather my energy, my commitment, my acting mojo. Quit worrying about feral bull dung patties and the nagging and cajoling that goes into getting reluctant crew members up a mountain.

I do my deep breathing while they eat or smoke or drink or whatever it is they do. Right now my eyes feel jumpy, my spirit feels jumpy. Must be all the bull dung patties. I need to calm down and re-energize myself. Forget the bulls. I go off and scream at the top of my lungs. Silently.

Finally, I’m ready, sort of. We get to work.

…We are kicking ass in the scene. The crew is right there with us. Lou the photographer is snapping away. We’ll have lots of photos. Then suddenly….

I cringe, waiting for the bovine impact I am sure is hurtling towards me.  Whew! False alarm. We find ourselves watching fascinated, safe on our mountain peak, as three male bulls square off in the valley below, mooing and bellowing at each other. Each fiercely holds down its corner of the triangle. We can’t film in all that racket, so we watch. After a half hour of this, their bellows start sounding hoarse. Then they quit bellowing altogether and just stand there. Boy, are these feral bulls stubborn.

In the new-found quiet, we go back to filming. Actor-Man and I do the bang bang segment (no guns involved), the dropping the bag down the mountain thing, the heartfelt talk thing, the clothes blowing back up in the air thing.

The clothes blowing in the air thing brings up the naysayer voices.

-That thing with the clothes will just look silly. No one is going to believe that an updraft blew all the clothes up.
-Let’s just try it, shall we?
-How can it possibly look real?
-We’ll have the crew members throw clothes up in the air that fall on me.
-That’s silly.
-Just try it!

The crew members are all laughing as they pelt me with clothes.

It works, sort of. 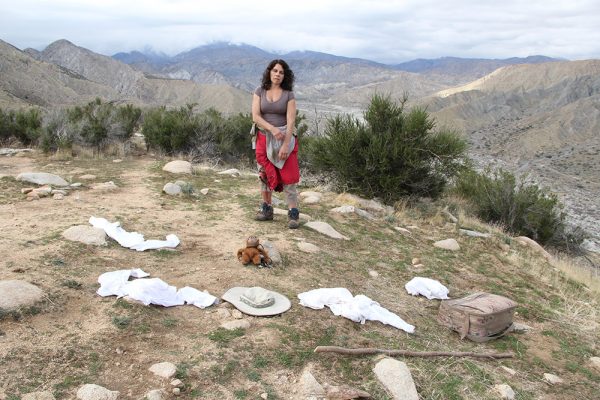 Several hours later, I’m happy. That came off better than I had thought. We’re packing up when we look at the bulls. They have not moved in hours. We leave them there, frozen statues in spotted cow colors. I guess their motto is, “if I can’t win, I won’t let you win, even if it makes me lose and I die here shitting cow dung patties”. A good lesson on the dangers of stubbornness taken too far.

As we head down, Tony the Italian paisano caterer, has arrived with a late lunch at the foot of the mountain. We can’t see him, but we sure can hear him. He leans on his car horn. “Come and get it!” His shrill voice and that car horn sure carry.

After lunch, a bit of travel to our second location of the day. We’re setting up for a nighttime shoot back at the gangbanger gunslinger location, the one where we almost got shot at the other day. We hope the lateness of the day means the gunslingers are gone.

The crew takes hours setting up the lights. Afternoon fades into night. We have set up in a beautiful narrow little canyon, devoid of gunslingers. The hues from the camera lights and the campfire they’ve started creates a beautiful interplay of soft blue and orange hues.

Tony is now back with dinner. The car horn, the screaming, and this time, also a bell of some sort, tell us he’s here. I head down to join Lou and Actor-Man, who have already gone to meet him. Tony awaits with a shrimp scampi for his main entree. And there’s something else. It appears we have a visitor that Actor-Man has made friends with – Robert, a guy decked out like he’s going on safari.

His big Desert Storm Humvee is loaded to the nines with every kind of computerized gadget, tracking device, telescope, radar, scanner, viral map, night vision camera, satellite radio, and electronic gizmo ever invented. The tires look like they belong on a tanker truck. I’m sure there’s a few guns in there too, maybe the same ones we encountered yesterday. A SWAT command mobile unit wouldn’t be as loaded. “Wow!” I say as he invites me to look inside.

-Hey, so Actor-Man here tells me you guys are shooting a movie, huh?
-Yeah. And you are…?
-Robert, nice to meet you. We’ve been watching you.
-We? Who’s we?
-All us neighbors. Through our telescopes. We live in that sub-division way down there.
-You have telescopes at home too?
-Sure, we all have telescopes. At home, in our cars, on our guns, you name it.
-Oh…
-Yeah, we were wondering what you were filming. We watched you all day yesterday.
-All day? You can see that far?
-Sure, I can tell you what you had for lunch.
-Hopefully not what I shit for lunch.

He laughs. I’m not really kidding.

-So you guys ran from the target shooters yesterday, huh? I don’t blame you.

He’s a jovial guy, quite friendly, charismatic even. Dare I say, even quite attractive, in a desert rat, safari-man kind of way. I don’t think he bears any ill will and is nice to get to know, but it sure is unnerving to know a whole town has been spying on you at super magnitude.

-Well, nice meeting you. I’ve got to get back to my crew. They’re waiting for me to bring dinner.
-Oh, I can help carry it. Actor-Man has invited me on the set, see what’s going on.
-What??? Actor-Man? But… he’s not the boss. And we have a permit.
-I just wanted to see. If it’s a problem, I’ll leave.
-No, it’s not a problem.

That’s Actor-Man who pipes up.

My blood starts to boil. Somehow I feel protective of my crew and my film and what we’re doing.

-Well, I will have to see if it’s all right with everyone. I’ll come back and let you know.

I head back up the canyon with dinners for the crew. Maybe it’s OK. The guy is pretty nice. He’s just curious.

I tell the crew. All of them hit the roof (though there is no roof). All at the same time.

-What does Actor-Man think he’s doing? Why is he making decisions that affect all of us? This guy’s a stranger, we’ve got thousands and thousands of dollars in gear, and yesterday we almost got shot by some of these gangbangers!

I don’t say that Robert has got more gear in his Humvee than all of our gear put together, so he really doesn’t need it, and he certainly doesn’t look like a gangbanger.

I am torn between the two sides. Just then Actor-Man brings Robert up, though I had told them to wait. OK, now I hit the roof. I feel blood shooting through my head.

-I can’t handle this.

I am quite willing to let him carry this one. He takes Actor-Man and Robert a ways off and speaks in dulcet but manly tones. When he returns, both the other two are headed down the hill.

-He was a nice guy, I say. Attractive, nice. Full of guns and telescopes…

-Nice or not, we have to be careful who we bring on set.

On the bright side, the shrimp scampi is to die for. Some of the crew make fun of Tony the caterer and his walk and his weird greasy ways, but I think he’s come through really good for. Sure, his food sometimes tastes of discount store fare. But all in all, pretty good. This shrimp scampi is good enough for three servings on my part. Never mind where he got shrimp in this desert; 24-hour desert Walmart, I suppose. Best to just enjoy it.

Soon even the angry crew is laughing when I tell them about Robert’s safari HumVee truck, and how the neighbors are eyeing us through their telescopes right now as we eat our shrimp scampi.

-Do these people have nothing better to do?
-That’s what they do here – look through telescopes and shoot guns. And run dune buggies and HumVees through the sand at night. It’s the way of the desert.

Later, Actor-Man returns sans Robert. A new crisis hits when we realize the scene I have written just does not work. It – just – does – not – work. And it’s obvious to everyone. How did I write such a badly motivated scene? After a lot of rigamarole and squirming and arguing and hemming and hawing and re-dos, we manage to save it. We change everything, pretty much improvising our way through it. Somehow it comes out. I think.

But I sure worked up a sweat. Wondering if I should give up filmmaking and screenwriting. And finally, the longest day of our entire film shoot is wrapped. Witnessed, I’m sure, by dozens of roving telescopes…

“Dead Weight” is a desert survival film.  Think of “The Revenant”, but instead of Leo DiCaprio starring, it’s me, and that wintry forest full of bears is a hot desert full of rattlesnakes, and instead of the hero seeking revenge, she seeks redemption. 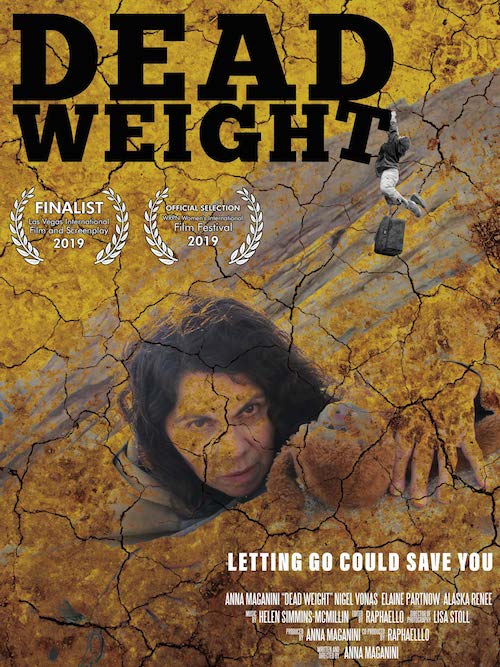 Anna Maganini is an actress/writer/filmmaker with TV credits on Black Monday, SMILF, Dexter, The Mentalist, and more. ‘Dead Weight’ is her film directorial debut. It has screened at Las Vegas International and WRPN Women’s International Film Festival (both nominated her for Best Actress). Ms. Maganini is also a cable TV reporter. Her reports and feature stories have won two L.A. Area Emmy awards and five nominations. Find out more on her website - annamaganini.com. 'Dead Weight' can also be viewed on Amazon.