From Script to Screen: The Rise of Hong Kong Cinema (Article)

At the intersection of eastern and western cultures, Hong Kong is a city of innovation. From its iconic skyline rising up from the sea to its status as an independent city-state at the edge of China, Hong Kong refuses to conform. So it’s no wonder this city’s cinematic landscape is so special. 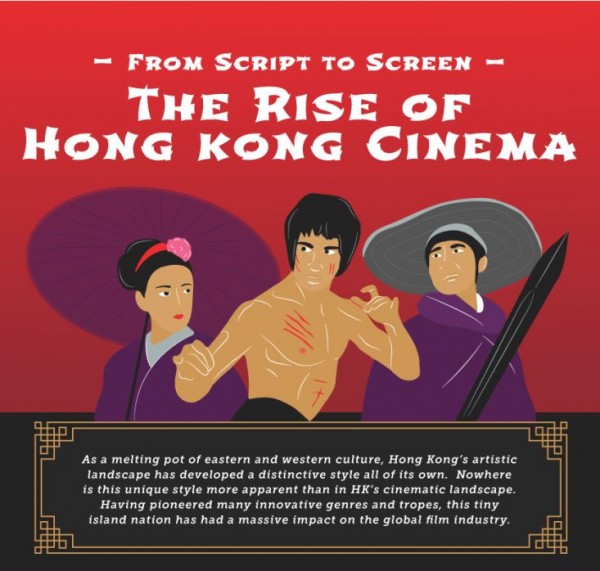 Today, Hong Kong’s box office revenue tops HK$ 1.6 billion. Its industry releases hundreds of films annually, supports more than 16,000 jobs and finds its home in more than 2,300 venues. But the vibrancy of Hong Kong’s contemporary film scene didn’t happen overnight. Rather, it is the culmination of more than a century of experimentation, development and hard work.

The history of film here runs all the way back to 1896, when a camera crew from the cutting-edge Lumiere Studio in France captured the first footage of Hong Kong’s streets. Thirteen years later, Stealing a Roast Duck, directed by Liang Shaobo became the first film produced in the city. Since then, Hong Kong has led the way with countless technologies and styles that have resounded on the international stage. The city’s filmmakers can be credited with pioneering hand-to-hand combat scenes, the so-called ‘Wire-Fu’ used in films like Crouching Tiger, Hidden Dragon and urban comedy action films of the sort Jackie Chan has become famous for. 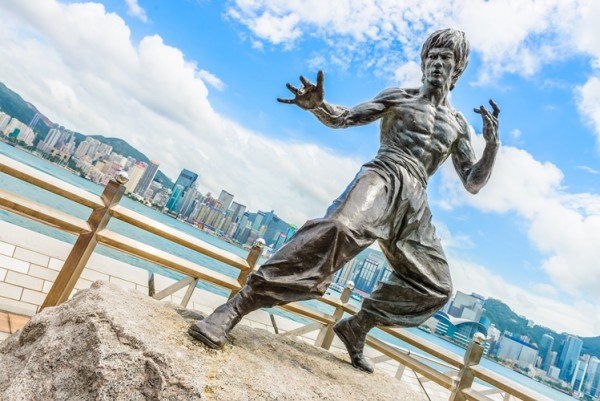 So the rich cinematic history and thriving modern film industry here have made Hong Kong a popular hub for film tourism today. More and more travellers are flocking here each year to experience the country’s unique cinemas, learn of the industry’s colourful history and engage with the active arts scene. From the decades-old, globally renowned Hong Kong International Film Festival to the impressively abundant Hong Kong Film Archive to the many monuments and statues dotting the city, Hong Kong has a wealth to offer film aficionados. The Avenue of the Stars, for example, is modelled after the Hollywood Walk of Fame, yet offers views of the harbour that are far more impressive than the drab backdrop of downtown LA. 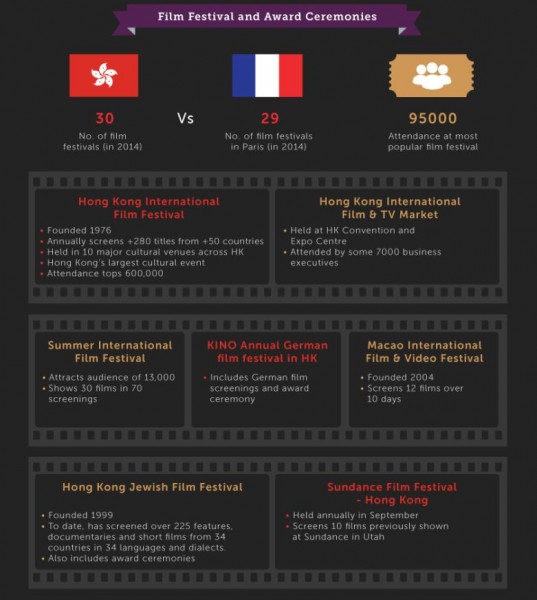 Hong Kong also hosts about thirty film festivals throughout the year, including the Summer International Film Festival and the Hong Kong Jewish Film Festival. In fact, Hong Kong had more film festivals in 2014 than France did that same year. But whether there is a festival on or not, quality cinema experiences are easy to come by any time of year in this eclectic urban centre. The Broadway Cinemateque in Kowloon, for instance, is the city’s iconic destination for indie and art-house film screenings—and the theatre is known for attracting a colourful crowd of young artists. On the other side of the coin, the Director’s Club at Cityplaza has just 16 seats in which moviegoers are treated to lavish luxury, being quietly wined and dined throughout the show. And for something a bit more conventional (and affordable), film fiends can head to the Golden Harvest Grand Ocean Theatre in Tsim Sha Tsui for a classic film experience in the old palatial style Hong Kong is known for. 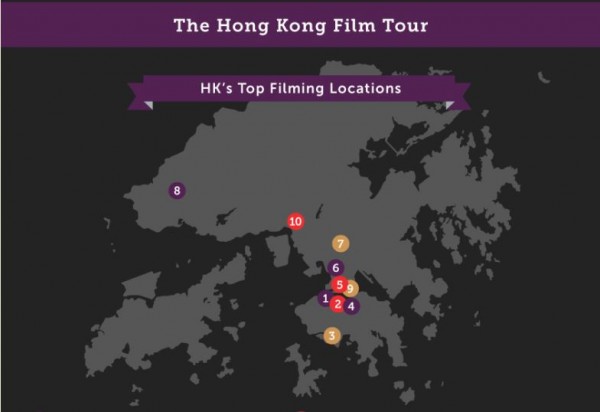 On the other hand, if nostalgia is on your agenda, Hong Kong’s streets also offer a wealth of destinations where movie fans can retrace the steps of their favourite on-screen characters. At the International Finance Tower 2, you can step onto the former set of The Dark Knight and Lara Croft Tomb Raider: The Cradle of Life. Across town at the Tai Pak Floating Restaurant in Aberdeen Harbour, you can see Hong Kong’s most often filmed location, where scores of movies, from the 1955 Love is a Many Splendored Thing to Stephen Soderberg’s 2011 thriller Contagion, have been shot. One can even retrace the karate chops of Bruce Lee at the Tsing Shan Monastery or stalk the trail of James Bond at the Peninsula Hotel. For fans of western or eastern films, the opportunities are plentiful. 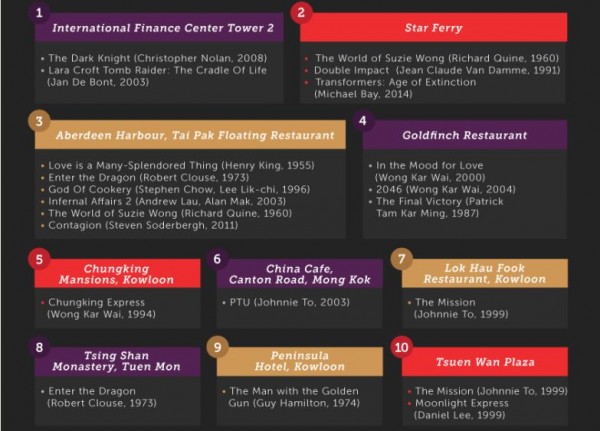 There are few other cities in the world in which film has played a more influential role in shaping culture, past and present. So if you are one of the lucky visitors to see Hong Kong in the coming years, be sure not to miss its rich cinematic destinations during your stay. Whether they are on the silver screen or in the city’s vibrant streets, Hong Kong’s film sights are guaranteed to make an impression you won’t soon forget.

View the full version of the Script to Screen – The Rise of Hong Kong Cinema Infographic below: