Socializing Success: Marketing an Online Film With No Budget (Article)

My name is James G. Wall and I made the feature film, The Truth About Romance. The film was released on YouTube and in one year it has reached over half a million views. This is an incredible achievement, one that I never thought would happen, when you consider the film is 90 minutes long, has no star names, made by a guy nobody knows and has no marketing budget, why would anybody watch it? The film itself only cost £250 to make, so how the hell did I do it?

I always knew the film would be released online as I didn’t have the funds to go to film festivals and I most certainly didn’t have a distributor! Throughout the entire pre-production and all the way up until the final week of release, I kept changing my mind on which platform I was going to use. I also didn’t have a clear release date in mind, which is a massive “DO NOT” when trying to market a film. All people want to know is “where” and “when” they can see it, all I could do was look at them cluelessly.

There are so many platforms these days to upload your film to, all offering different options, that it’s a bit daunting and makes for a difficult decision. At first I was looking for one that I could sell the film on which ruled out YouTube and Vimeo (didn’t have On Demand at that point). This caused the first major problem because if you want to market to a large audience you need a platform that people know and feel safe with. If you’re saying “go to this website that you’ve never heard of” and spend some cash, the chances are you’ll limit your audience by a large percent. After long consideration I realized that trying to sell a film that nobody really cared about was going to be a massive task, and what did I really want: only my mum watching it or give the film away for free and hopefully hundreds watching it? What was more important: making a bit of money back or getting it seen by as many as possible? At this stage in my career, I just wanted to show people what I could do. I hadn’t spent any real money making the film, so I wasn’t really losing anything.

I decided on Vimeo, because I thought that had the best player, but then a week before release, I changed my mind to YouTube. I already had a few hundred subscribers and I’d been actively uploading short films right up until release, so I figured: worst case scenario, only my subscribers would watch it. Making that decision was my starting point, but it was a decision I should’ve made a year earlier. 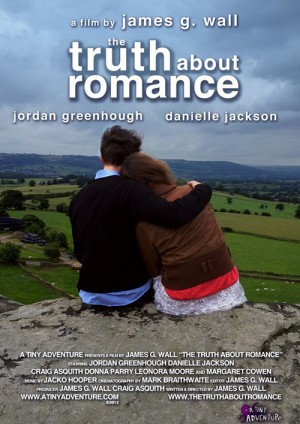 The Truth About Romance Official Poster

I learned a lot from making The Truth About Romance and I’m in a great position for when I start making my next film. When you’re making an indie film, especially an online film, marketing starts from day one. As soon as you get that first idea, start documenting it. Videos, blog post, social media etc. It all goes to building an audience. This is something I didn’t do very well; I started out strong but then the videos stopped and the time between blog posts grew longer and longer. I was afraid that I might fail and look stupid in the public eye, but, if you have some self-belief, you’ll definitely benefit from it.

Once I had an almost finished/still slightly rough version of the film, I uploaded it (password protected) and sent it to a few people. People that I trusted, but also people that I knew who wrote blogs and were very active on social media (I also had a couple of journalist friends that did me a favor, too.) This was great for my release date, press ready and waiting. Looking back on it, I wish I’d have done a lot more for the release, but this was all a learning process.

Once the film was uploaded and ready for the public, I hammered it: social media, texting friends, and I searched high and low for anybody that wrote a film blog and emailed them to watch and write about the film. I offered to do interviews or write features on any subject related to the film. If a website had an email address, I sent them a message. I never spammed anybody, though, but always made it relevant to their website. I also targeted people that were popular on social media like Twitter and Instagram, not celebrities because that would most likely be a waste of time, but those that had a few thousands followers. This took a lot of time. It’s not something that can be done well in an hour or two. I’d say that I haven’t stopped looking for opportunities to tell people about my film for the last year (and I’m still at it now.) You see, this is my shop window: the purpose of the film was to get out there, but it wasn’t just to upload a film to YouTube and see what happened. It was my one shot at showing the world that I could make a film.

It seemed to take ages to reach 10,000 views, and when it happened it felt incredible! Once it hit 10k it really started to shoot up. Around this point I started to take note on what was being searched on YouTube and what tags were popular. Certain words worked a lot better than others. I’m not saying I used words like ‘porn’ and ‘boobs’–which probably would’ve worked, but I’d have a lot of unhappy viewers. I didn’t want to trick people into watching my film; I just highlighted the important bits. For example, people search for ‘full film’ and add a year, because people are looking to get a freebie and there are a lot of sneaky free films on YouTube. I made sure I added ‘Full Film’ to my title, and in the description wrote that the film was made in 2012, and released in 2013, and was in a magazine in 2014, because everything you write in the description goes towards what people are searching, if somebody searched for ‘full film 2014’ my film would show up in the search. To further avoid unhappy viewers, I also added ‘British Romantic Comedy’ to the title. This will put off the people looking for an action or horror film, but it also means I won’t get any negative feedback in the comments (I’d say it’s been 90% positive). Also if somebody is searching for ‘Comedy Full Film’ or ‘Romance Full Film’ I will definitely be near the top.

Once the film went over 20,000 views I started to get people contacting me, which was bizarre but awesome. Before I knew it I had a film with 100,000 views and I’d been in a national magazine, and I was talking to film festivals and companies, random people from all over the world had been emailing me or messaging the Facebook page, somebody even included my film in their dissertation!

I made sure that I always replied to emails, Facebook, and comments on YouTube, mainly because I was massively grateful that they’d taken that time out, but I also knew if I made a connection with them they’d be more likely to tell their friends or share the link. It does take a lot of time, and I’ve never copied and pasted the same thank you message. But I’d rather try engaging with these nice people that sat for 90 minutes and watched my film, as it’s highly likely that they’ll stick around to see my next film if I show my appreciation.

I didn’t do anything spectacular or something that somebody else couldn’t do, I didn’t spend any money or get lucky. I simply work hard at getting people to view my film, and probably more important is I made a film I’m very proud of: a film that I know if people watch. they’ll enjoy. Having that belief in my film has kept me pushing on. Again, anybody could do it. It just takes determination.

If you fancy watching my film, I’ve embedded it below.

James G. Wall is a filmmaker from Leeds, UK. In 2012, he created a microbudget feature film called, The Truth About Romance, which was shot for just £250! Uploaded in 2013 to YouTube, over the course of a year, it's gain half a million views. (Feel free to check it out at the Truth About Romance YouTube Page .)