Oculus: The Man with the Plan (Flashback Critique)

Flashback Critique
Oculus
Chapter 3: The Man with the Plan 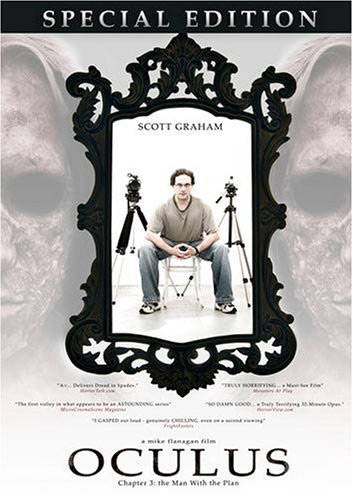 [Editor’s Note: With the amazing new Oculus feature film about to come out on April 11th, it seemed appropriate for us to showcase the flashback critique that began the film franchise back from 2006.  Some slight changes have been made to transform it for the current database system, and the links for getting new information on this film have all been updated.  As a bonus, at the end, we’ll include the bonus extended trailer for the 2014 film! -JH]

I can clearly remember my initial experiences with horror movies. The first one occurred when I was about four years old, watching some weird film on TV with my mother about a skinny girl with long, straight, light-colored hair was walking around covered in red paint (well, to my young mind it was red paint) while a building burned behind her. I asked my mom what it was. “Carrie,” she replied. “Hey! That’s my name too!” I said with a grin, more impressed by the character’s name than anything else. Needless to say, it didn’t scare me much (although that was more due to the fact that I didn’t understand it!) It wasn’t until eight years later that I got back into these films with classics like the original Invisible Man and The Fly, which freaked me out for some reason.

The most memorable experience I had was when I went to see the Blair Witch Project, which, at the time, hadn’t yet been definitively proven false. I almost didn’t make it through the movie, I was so scared. I remember gripping the sides of my seat thinking, “If this isn’t over soon, I’m getting up and leaving.” For me, the thing that made it so scary was the implied elements of terror that built up suspense; the characters find all of the marks and indicators that they will die like the victims they’ve studied. I kept expecting some sort of bloody Boogeyman to jump out from behind a tree and start hacking everyone apart. It never happened, but the suspense and tension were so thick it was almost palpable. It took me quite awhile to shake off that experience.

Now, several years and many films later, I came across Oculus, from director Mike Flanagan, and again felt that almost tangible apprehension and delicious terror.

The story of Oculus is that of Tim Russel (played by Livelihood’s Scott Graham), an obsessed researcher conducting a potentially fatal experiment. He has located and obtained a large, ornate mirror that once belonged to his parents, and which he believes is in some insidious way responsible for their deaths, as well as the horrific deaths of the rest of its previous owners. To prove his theory, he locks himself in a bare room with the mirror, three video cameras and monitors, food, water, a few alarm clocks, and two phones (a cell and a land line). Then he waits.

As he waits, he begins to explain to the cameras the history of the mirror and what happened to each of its owners: one dies of dehydration while sitting in a tub full of water for three days, another shatters her own bones with a hammer, another chews through a live electrical wire… the list goes on and on. As time creeps by (we’re never sure exactly how much time passes), Tim conducts various experiments to “test” the mirror, but in spite of all of the numerous precautions he’s taken, we see him slowly descend into delusion before finally succumbing to the mirror himself.

Tim is armed with all the technology and the prowess to defeat his demons.

Whether or not you liked movies like Blair Witch Project or The Sixth Sense, you have to admit that suggestive horror is almost always more effective than blatant blood and gore. Those things (sometimes quite small) that the audience sees and the character usually never does, help build the tension immensely, and this film makes great use of this. For example, at one point, Tim is addressing one of the cameras and is facing away from the mirror, which has been covered by a large sheet. We see the POV of the camera through the monitor, and behind Tim, a pair of bloodstained bare feet are visible just beneath the sheet. As Tim continues talking, the feet slowly walk forward, and begin pulling the sheet with it, revealing a silhouette of a man. Then Tim, still oblivious, turns around to point to the mirror, and there’s nothing there. And while no bloody corpse crawls out of the mirror and Tim never gets sucked into the mirror, there is a constantly growing anticipation that something bad is definitely going to happen.

Adding to this is Scott Graham’s phenomenal acting; it is very demanding for an actor to have to carry an entire project all by himself, even for 32 minutes. Scott’s portrayal of the determined Tim at the outset is very strong and focused, and draws us in immediately. This in turn makes his descent into madness even more powerful, because he starts out so “together”. Hats off also to writers Mike Flanagan and Jeff Seidman for putting together such a smooth, creative, and compelling story. The pacing is perfect, not too rushed and not too tedious.

The ending is in a sense both resolved (because he dies… don’t get your hopes up) and unresolved (you’re not exactly sure how he dies, since everyone else has apparently died in some obvious, horrific way). Then again, this story is, according to Flanagan, “the first installment–but third chapter–in what’s intended to be a [nine-part] horror anthology”; so there’s a good chance we’ll find out what happened to Tim from a perspective other than his own delusional state.

However, can he defeat the demons that live in the mirror?

The film is set in a bare white-walled room, which adds to the feeling of separation from reality. Clothing and props are very simple, thus returning attention to the focus of the story: the mirror. While there aren’t a whole lot of special effects, the ones that are used are done well, particularly a semi-transparent apparition that flashes briefly by Tim as he is trying to rouse himself from a nap. Similar subtle effects touches appear at other times, and are very effective. Additionally, the lighting–which could have been problematic because the whole room is white–was very well done with no noticeable white-balancing problems.

The camerawork is by and large very well done. I especially liked the camera POVs as seen through the monitors; it adds an element of objectivity and honesty, which is especially helpful when dealing with a character whose sense of reality is constantly shifting. However, there are several instances at the beginning where the camera movement is fairly shaky, and in one place, where it is re-centered on the actor while he is speaking. These are rather jerky, mechanical movements that jolt the viewer out of the feeling that they are the only ones in the room; it reminds them that there’s a cameraman there, which makes it slightly more difficult for them to get sucked in to the story. These camera movements and jolts are fine in the second part of the film, as the storyline has built up the suspense by that time to make sudden movements feel intentional and frightening.

To further add to the visual look, the intro and outro credits are extremely professional, feeling very much like the credits in an M. Night Shyamalan film, with a nice distortive dissolve in and dissolve out.

I was very impressed by the audio quality on this project. There was no “tinny” quality to the sound (which frequently happens when it’s not absorbed properly, especially in a bare room), and the dialogue was clear and articulated. There wasn’t a whole lot of ambient noise, which also added to the feeling that Tim was separated from human contact. There were some nice sound effects touches, particularly in a scene in which Tim is surrounded in the dim, half-lit room by the former owners the mirror has claimed; one by one, each of them opens their mouths, emitting the sounds of the alarms clocks, cell phones, etc. that Tim has with him in the room. (That was an especially nice, eerie touch!) The minimalistic and visceral music is very effective as well, adding to the feeling of a mounting tension and imminent doom.

And just how much would you expect to spend on such a nightmare-inducing project? $10,000? $5,000? Well, now, with sufficient creativity, you too can make something like this for the low, low price of just $2,000! In all seriousness, I was floored by just how effectively and professionally that money was used. Not only did Mr. Flanagan budget his money wisely–renting a location, cameras, lights, and feeding the crew–but also his time, as well. The amount of time and attention taken to post-production (audio, video, special effects, etc.) is apparent and very wisely spent.

Now, I know that suspense/horror is not everyone’s cup of tea. And while Oculus is more like a cross between an M. Night Shayamalan movie and a Twilight Zone episode than Nightmare on Elm Street, I know that some people they won’t be interested. However, even the ones who think they aren’t interested, are in for a surprise. My husband really dislikes horror, yet he found himself riveted to this compelling short, enjoying the feeling of getting sucked into the story even though he knew it would send shivers down his spine.

Would I watch it again? Heck yes. (Although I might not go around mirrors for an hour or so afterward!)
Would I recommend this to my friends to watch? Definitely.
Do I think this is good enough to be shown in theaters? Oh yeah, baby.
Are we already in talks to with the director to make it part of our next Ultra-Indie Film Weekend at the theaters? Do you even have to ask???

An all-around great film. The story is creative, well-told, and smooth-flowing, and Scott Graham’s acting is downright awesome. It has a simple but effective look, complemented by inventive camera angles and well-paced editing. The audio is wonderfully clear, with effective ambient sound and background music. The use of both financial and time budget were very effective, and I would definitely recommend this film to others. I can’t wait to see what else will come from the camera of Mike Flanigan! (And what his finished anthology looks like!)

Kari Ann Morgan is a retired Independent film producer living in Lexington, KY. Ms. Morgan’s tumultuous transition from rock’n’roll/gamer chick to mother and then back again (with children in tow) led to her becoming a humor columnist. She currently writes the independent (and highly ironic) blog, Mother Irreverent. When she's not writing, she's introducing her kids to old-school NES video games, making playhouses from cardboard boxes, baking nerd-themed cakes and cupcakes, and learning about physics. And she fervently maintains that she is cleverly disguised as a responsible adult.