Ethan is a car thief. He boosts cars for a living, which has led to a lifetime of friction and disconnect between himself and those closest to him. When he carjacks a car, throws the occupant out by the side of the road, and drives off into the boonies, it’s just another day in his life. However, as he drives toward the rendezvous he’s set up ahead of time with his cohorts, a disturbing news broadcast makes him realize that this is the worst day for business as usual.

The broadcasts alert him to an ongoing alien invasion, which will likely result in the human race being destroyed or enslaved. Unfortunately, before he can get a handle on things, he discovers that the car he’s stolen was low on fuel and leaves him stranded. Dead zone cell reception forces him to hoof it in search of a place to syphon gas, or at least to a place where he can get some reception. While he at first tries to call those who can help him out of this jam, he begins to realize that the people he most wants to talk to in what might be his last days are the family members he’s become isolated from. 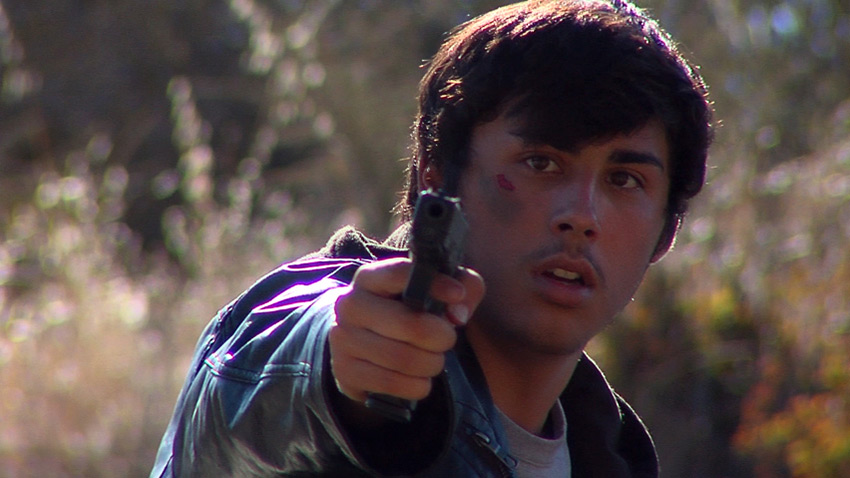 Ethan has learned to live a violent life of boosting and jacking cars.

“Broadcast” uses a believable and intriguing storyline which pulls you in. The script was co-written by director Manuel Crosby and Ian Robertson and turned out pretty nicely. Because the film was made on a shoestring budget, they chose to indicate a number of things through suggestion and audio, rather than overt effects. This is a very good idea, as audio and suggestion is far more scary than anything you can visually show people. (And it’s one that I personally made use of in my post-apocalyptic introductory film for World of Depleted: Day 419.)

The acting of Anthony Dooley in the lead role of Ethan was pretty solid throughout and the creation of the radio broadcasts was excellent. The radio announcer was compelling and believable and the effective use of these announcements made the film feel as real as today. Unfortunately, where the film had problems in content was in regards to the voice acting of the family members Ethan talks to over his cell phone. As these calls are a major portion of the story, these breakdowns do a lot to pull the viewer out of the film.

With that said, this did not seem to be because the voice actors were not talented, but because they were trying to act in a vacuum. (With phone dialogue, usually both sides of the phone call are recorded separately. For less experienced actors, having to act without another person directly in front of them leads to overacting and artificial feeling performances. Based on the issues that were present, I would guess that’s what happened here.)

Fortunately, because it’s an audio problem that doesn’t require additional filmming, this can likely be solved by rerecording the voice calls with the main actor running lines with the voice actor. For future films that may wish to use cellular-phone dialogue, when appropriate, I would suggest actually bringing the voice actors on the set and recording the calls there so that the voice actors can be in the moment with the actual actor. Because of the amount of distortion that cell phone audio goes through, you have a decent amount of fudge factor on differences in environmental noise should you record your voice actor in a setting that is different from the one they’re supposed to be in.

The conclusion of the film works very well. Suffice it to say that there is some question about the sanity of Ethan, as we wonder if we are hearing what Ethan hears, but, perhaps, the rest of the world does not. The conclusion addresses that question effectively. 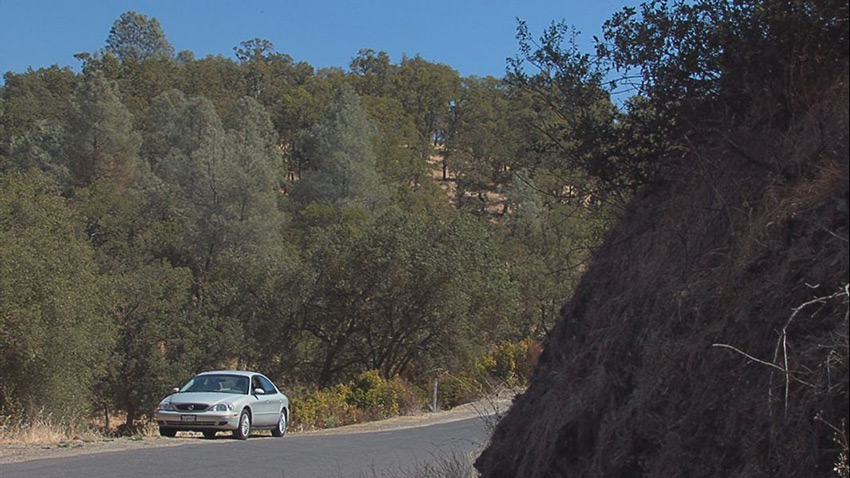 When his jacked car leaves him stranded, he discovers just how much danger those he cares about are in.

The camerawork from DP Darren Knapp, shot with the now venerable JVC GY-HD100, was excellent. A lot of well thought out camera shots were used, focusing on the viewpoint of the main character in such a way that you felt certain that something dangerous was lurking outside the screen. In contrast to the shots from Ethan’s perspective where the outside world is dangerous and ominous were wide shots that feature Ethan as a small part of the barren locations, helping to underscore the alien-ness Ethan feels. The visual clues help back up the dialogue clues that show how disconnected Ethan has become in his everyday life.

Much of the film was handheld, but they managed to do this without giving the viewer a migraine, which is very good. (Clearly, Paul Greengrass did not direct this film.) With that said, there were some things that were a little off in this regard.

Because of the amount of handheld, the effect of tripod shots was to serve as establishing shots for new scenes in the film. The problem came in a number of times where a handheld shot intercut to a tripod shot and back again within the scene. This was most distracting when cutting to POVs from Ethan’s perspective. POVs almost always need to be some sort of moving shot, whether it’s handheld or steadycam.

Now, if the filmmakers have any friends who are After Effects junkies, this is a solvable problem using an After Effects component called the Wiggler, which uses random information to drive animation keyframes. Andrew Kramer over at VideoCopilot.net has a number of tutorials on how to use the Wiggler effect in After Effects, one of which will turn a stationary camera shot into a handheld shot. (The nickel overview is that a precomp is made of the stationary shot and, in the external comp, its horizontal and vertical position is animated by a 2-5 pixel wiggler. When paired with the option of mirroring edge pixels, this creates a pretty authentic handheld facsimile.)

The final shot of the film worked really well, revealing the necessary facts of the movie in a way that it would have the most impact.

The audio for this film was really quite good. The dialogue was well recorded, even though there were a few times where it broke down a little bit under the windy conditions that Ethan was in from time to time. As someone who’s shot dialogue outdoors and knows first hand how difficult that can be in a low budget film, I have a lot of respect for their ability to get usable dialogue. It’s also clever to have scenes in which only one side of the conversation has to be recorded in a location, because then you can cheat dialogue anomalies for the other side.

The score helped move the film along and helped you stay in the story, although it was quite minimal. (They had to adjust a limited score due to time constraints to meet their later needs, which is always challenging, as I had to do some similar tricks in my Day 419 film.) The sound effects, many of which were foleyed for the film, were likewise well done, although there was one area where it could use a little work.

The cell phone, as mentioned before, is a major component of this film. However, only part of the cell phone sounds are added, like the sound of the phone ringing, for example, while many of the keypresses are either silent or extremely soft. This feels like a mistake, especially because the phone is so much a character in this film. It would help a lot to have digital sounds for each keypress.

If the filmmakers can’t find good creative commons sounds for this, they can have someone with an iPhone turn on their “Keyboard Clicks” sound and record a bunch of typing with it. Then use the click for each finger movement on the phone when Ethan isn’t dialing a number. Then record the iphone “phone number keypad” tones and use those for the times he’s actually dialing. It may sound stupid, but that will really help make this film more immersive. 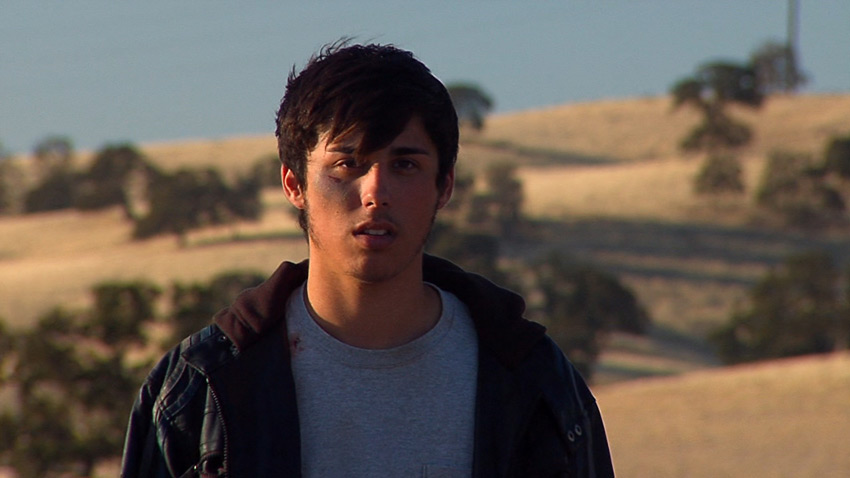 Ethan has to come to grips with how dangerous being a loner can be under the darkest of circumstances.

Producer Brandon Towne and the creative team behind “Broadcast” really pushed the boundaries of what they could accomplish on almost no budget. They found out what equipment they could borrow from their local Public Access television station and then used that equipment for most of their needs. This allowed the rest of the sub $600 budget to go toward wardrobe, food, expendables, editing software, and costs associated with the music. They then donated the film to be aired on their local Public Access channel.

I love it when filmmakers use their limitations to help sculpt their stories, as I believe this is one of the great powers that low-budget filmmakers have that is often forgotten by Hollywood.
Lasting Appeal
While the concept of the film definitely has a lot of lasting appeal, the problematic audio performances currently drag the lasting appeal down quite a bit. If those were remedied with re-recording, I think this film could definitely become an awesome calling card piece for all involved. (And, as the concept is pretty unique, it might even have enough “legs” to be made into a feature film.)

The principle behind Broadcast is really great and one that is made truly spooky because of the very financial limits they had to create under. With that said, it currently needs some work on the voice acting to bring the film up to the level it deserves to be viewed at. I hope that can be accomplished because this creative team deserves some accolades for their hard work! In addition, I look forward to seeing what they come up with for future films! (And would love to chat with them about taking a post-apocalyptic stab at a World of Depleted short!)