This is Meg: Capturing the Realities of Hollywood “Success” with Black Magic (Retrospective/Case Study)

Disclosure: We at MFM have determined this retrospective has objective valuable info for filmmakers, but do want to clarify that the writer of this article is associated with Blackmagic Design.  Just because Blackmagic cameras and DaVinci Resolve were the right fit for this particular film doesn’t mean they will be the right fit for your film, so be sure to do your own tests and confirm which cameras and post will be right for you and your project. -JTH

Wrangling the monster that is the Hollywood movie industry is no small feat. Professional filmmaker Alex Ferrari has encountered his fair share of production headaches, from last-minute project cancellations to the notion that a successful film requires a massive budget and huge stars. With today’s technology on his side, Ferrari began planning for an entirely different kind of project. 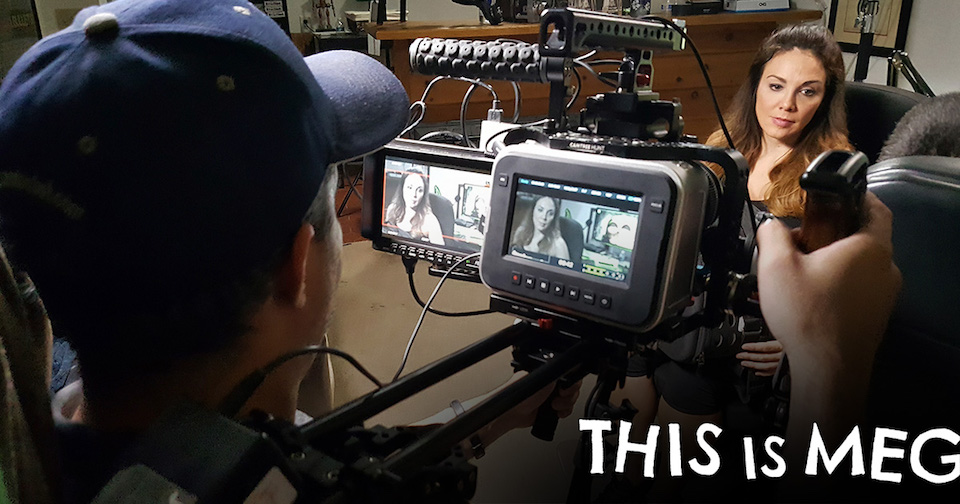 The project went from an idea on paper to a finished film in just five months.

“This is Meg” was the passion project born of his experiences. The film follows a working comedienne and actress, Meg, as she struggles to keep up with the social media stars that now seem to be running Hollywood. The plot was spawned in response to the endless number of films and stories about young actresses trying to “make it” and get their first real break. This time, Meg has “made it” and takes the viewer along for the ride as she sets out in search of something bigger, eventually learning to embrace the good and the bad that comes with life.

The project went from an idea on paper to a finished film in just five months. With a shoestring budget and a crew of just three, Ferrari’s team managed to keep filming down to a total of eight days spread over the course of six weeks.

“Are We Making a Movie?”

To start, Ferrari reconnected with Jill-Michele Meleán, having worked with her in the past on other projects. Meleán wrote, casted, scouted locations and starred in the film, while Ferrari served in all the technical, directing and post production roles. Though the duo was striving for a structured production process, keeping the budget low gave a sense of free flow during pre-production. Within just three weeks they had a script with a basic outline for the story, opting to leave scene specifics up to the actors and the energy in the room at the time.

This meant that one of the few things that the team opted to have control over was the look and feel of the film in post production, especially keeping in mind that they would not have budget for lighting crews. Ferrari and Meleán both wanted a cinematic look for the film without having it look too clean; they wanted it to still look like an indie film. A finished product that appeared over-polished didn’t make sense for the kind of real-life story they were telling.

This look created a unique set of challenges for Ferrari, such as controlling the lighting in post production after shooting in unfiltered daylight next to a reflective swimming pool. Though he had experience as a DP on other projects, he considered himself more of a colorist, which aided him significantly in post production. 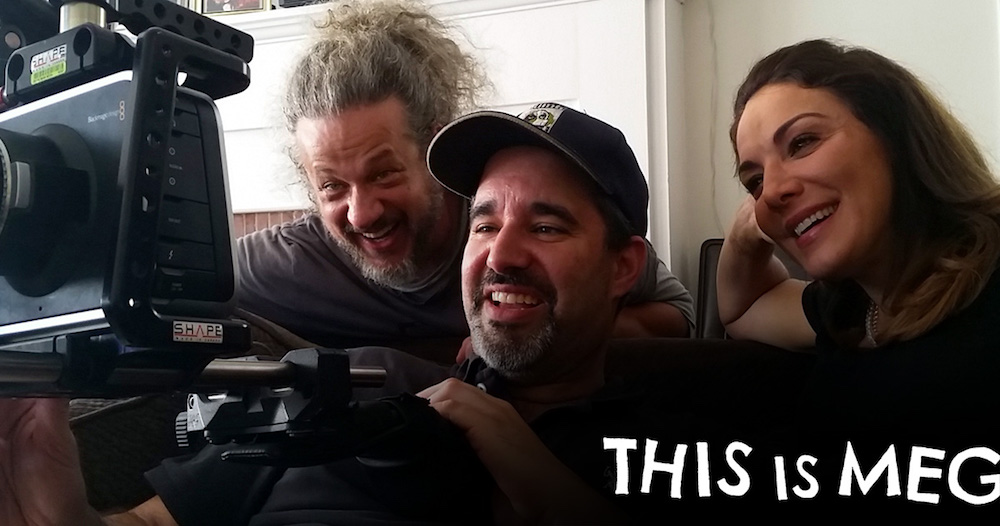 Ferrari shot the film in RAW to have maximum flexibility in post production.

“When planning the shoot, I knew that I had Blackmagic Design’s DaVinci Resolve Studio to help me later in post. I knew if I threw the ball right down the middle, meaning that as long as the shot wasn’t completely unuseable, I could achieve a specific, malleable look in post. And that’s basically what I did. The Blackmagic Cinema Cameras partnered with DaVinci Resolve Studio made this achievable with limited budget,” says Ferrari.

After shooting initially with just one camera, Ferrari contracted his friend and colleague Austin Nordell to film the behind-the-scenes action during production. Upon realizing that Nordell was also using a Cinema Camera, Ferrari recruited him as the film’s second camera operator. Luckily for Ferrari, adding Nordell as second camera operator was an easy decision as the workflow would still be contained within the same camera ecosystem.

A Cinematic Look on an Indie Budget

When dealing with a small film budget, a large crew and lighting teams are not financially feasible. As such, it was crucial that Ferrari had total control over the look of his film in post production so that he could achieve the stylized look he was after.

Shooting in RAW meant that the team could get the most out of the footage in post production, but it also meant using seven terabytes worth of storage for the film. When deciding what codec to shoot in, it’s important for filmmakers to weigh the pros and cons, as RAW will allow for an uncompressed image but it will take a lot of storage, whereas other codecs will be easier on the storage budget but will have less latitude in post. To save time, Ferrari did not transfer any data off the SSD cards on set; rather he would pack enough of them for the whole day, totaling around 550 gigabytes per day. He would then go home and offload all footage from the shoot.

Although shooting in RAW required plenty of storage to accommodate the amount of information stored in these files, it proved to be a saving grace for Ferrari. He elaborates:

“One scene in particular where RAW saved me was shot in completely uncontrolled bright sunlight by the edge of a swimming pool. I shot one of our actresses for about an hour before the direct sunlight started hitting her face. So, when I got to post, I saw the overexposure on her face and just started reworking the exposure, tone, highlights and shadows. I was amazed to see that it wasn’t completely blown out and unworkable. The range of shadow that I was able to get on her legs and on her face was remarkable, and it was only because of the camera’s RAW capability and 13 stops of dynamic range. The finished product doesn’t look like it’s bright sunlight, it just looks like it’s purposefully crafted.”

Ferrari delivered this scene by sectioning off the part of his grade where the overexposure was most intense and fine tuning the highlights without affecting the rest of frame. Ferrari used up to 18 Power Windows for this scene, overlaying different parts of the actress’ body so that he could control the light on each specific part of her to achieve a natural yet consistent look. Using Power Windows, or masks, works well if filmmakers are working with a frame that requires minute adjustments across an overexposed area. 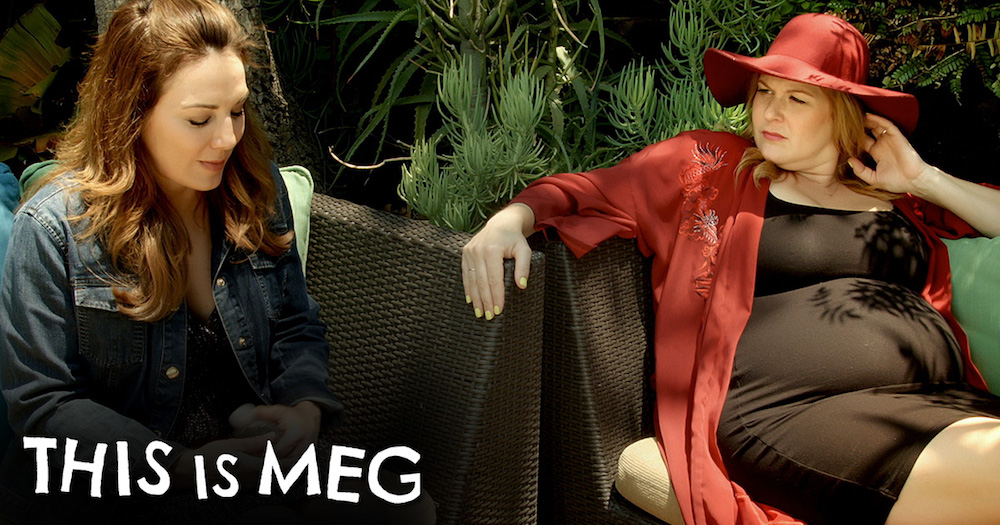 Capturing footage in RAW was beneficial especially for this scene by the pool.

In terms of ergonomics and workflow efficiencies from production to post, Ferrari notes that he’s struggled in the past, even as a professional filmmaker, to get through other cameras’ complex ecosystem of menus and nuances. He lauds the ease of use from start to finish when projects are contained within one environment.

“The ease of transferring the content off of the camera right onto a hard drive, and from there right into post production, makes the Blackmagic system very easy to use.”

When addressing various adjustments in post production, Ferrari says that the back and forth between an NLE and color platform can be extremely time consuming. He continues:

“What’s brilliant about working with an editor and a color system in one is that you can completely avoid roundtripping. Sometimes when editing, you drop a clip into the timeline and it just won’t work out in color, forcing you to leave your editing system and pull the clip into your color system. This has been completely eliminated by allowing me to toggle between edit and color all in the same platform.”

When a project’s workflow is contained within one ecosystem of products, it removes compatibility and formatting issues, ultimately saving time and money. Completely eliminating round tripping when editing, coloring and finishing a film is especially important for a one-man post production team, such as Ferrari’s, when maximizing time is of the utmost importance in keeping a budget low.

About “This is Meg” and Alex Ferrari

Based on true events, “This is Meg” is a transparent look into the L.A. lifestyle of a “working but not famous” comedienne and actress. She’s not working as much as she used to because social media stars are trumping actors that have been in the business for decades. The sparkle of Hollywood Glam has changed to Twitter followers making three-minute online videos and she’s still playing the industry game with the rulebook of ten years ago. Alex Ferrari is the founder of Indie Film Hustle, an online resource for the indie filmmaking community. “This Is Meg” was funded in part by his online audience.

The film debuted at CineQuest in San Jose, California in March 2017 and is now available on iTunes.

For more information on “This is Meg,” please visit www.thisismeg.com.