“Magic Bullet Suite 12 is a return to our roots: powerful color correction with a focus on a simple and enjoyable user experience,” comments Nate Sparks, Magic Bullet Suite product manager. “We stepped back and looked at every feature introduced over the years and asked, ‘How can this be better?’ Every tool has been optimized for the GPU, providing real time rendering and so much more.”

To celebrate this monumental release, Red Giant’s film team has created “Old/New,” a new short film narrated by Patton Oswalt. Watch it at redgiant.com, where it is featured on the front page of the site.

A landmark release, Magic Bullet Suite 12 is packed with new tools and other product updates. New features in Magic Bullet Looks include 198 new Looks presets based off of popular films and TV shows, as well as nine new tools – like the color space tool, 4-way color tool, and the film negative and film print tools. Colorista III has been streamlined dramatically, and now integrates beautifully with Adobe Creative Cloud’s new masking and automatic tracking features, making multi-layered, masked corrections easier than ever. The all-new Magic Bullet Film gives footage the look of real motion picture film by emulating the entire photochemical process – from the original film negative, to color correction and finally to the print stock. For a full list of new tools and features available in the Magic Bullet Suite 12, please visit redgiant.com/products/magic-bullet-suite/.

Unlike most other comprehensive color correction tools, the Magic Bullet Suite integrates seamlessly within an artist’s host application of choice, giving users powerful, real time tools directly on their editing timeline. In addition, the newly updated tools in Magic Bullet Suite 12 remove the barriers of complexity usually found in professional color correction programs, by offering intuitive controls that provide artists with a more familiar experience. All of this saves time by giving users immediate feedback in an environment they already know, along with controls they intuitively understand.

“Every filmmaker I know takes color seriously. But they also work with deadlines and ever-changing client demands,” says Stu Maschwitz, creative director, Magic Bullet Suite. “Powerful color correction should not mean having to leave your editing timeline. And don’t tell your client this, but it can also be really fun.”

The tools in Magic Bullet Suite 12 are fully compatible with Adobe After Effects and Premiere Pro, and include additional host support for Final Cut Pro X, Avid, and other industry standard NLEs (support varies depending on the tool). This versatility allows facilities with multiple artists or large workgroups to easily share looks, tools and concepts across the production chain. GPU acceleration improves the workflow by making previewing and rendering faster than ever, while new and improved effects from tools like Mojo, Magic Bullet Looks and Magic Bullet Film let users make footage look beautiful fast.

“Magic Bullet Suite has been my go-to color correction tool for years, and this update is the most exciting version yet,” states filmmaker Eric Escobar. “The new Film tools are exactly what I’ve been wanting: real film emulation, built from extensive research, analysis and development. I love that I can quickly mimic not just the negative and print stocks, but also the photochemical process for ‘printing’ my image. These powerful tools have already become essential to my grading work.”

NEW PRODUCT – Magic Bullet Film is brand new to Magic Bullet Suite 12 and gives your footage the authentic look of real film – emulating not just the film stocks themselves, but the entire photochemical process, from the original film negative, to color grading, film grain and vignettes, and finally to the print stock. Magic Bullet Film includes 22 Negative Stocks and four Print Stocks, totaling in 26 uniquely authentic stocks to choose from.

NEW VERSION – Magic Bullet Looks 3.0 is the easiest, most powerful way to make your video look great. Sporting a major update to its UI and UX, Magic Bullet Looks features 198 brand new, completely customizable presets based on popular film and TV shows. With an intuitive set of tools for creating your own color grade, you’ll understand why Magic Bullet Looks is voted the number one plug-in for professional editors, year after year.

NEW VERSION – Magic Bullet Colorista III brings streamlined, professional color correction directly to your editing timeline. Also getting a major UI update, Colorista’s new simplified design gives you easy access to the powerful and essential tools needed to correct and refine the color in your shot. Taking advantage of Adobe CC2014’s new masking and tracking features, Colorista III is no longer weighed down by several layers of controls, resulting in a very clean, focused experience for editors and filmmakers.

NEW VERSION – Magic Bullet Mojo 2.0 makes it easy to instantly give your footage the stylized color grade of a Hollywood blockbuster in seconds. With a few simple sliders, you can inject your footage with a customized color treatment that sets off skin tones against a cool, cinematic look. With GPU acceleration, Mojo effects render in near real time, and are 20% faster in Adobe products and 80% faster in Final Cut Pro X.

NEW VERSION – Magic Bullet Cosmo 2.0 is your secret weapon for perfect cosmetic cleanup. This simple yet powerful tool helps you quickly correct skin tones and remove age or blemishes from your on-screen talent. Cosmo is also GPU-accelerated, works 20% faster in Adobe products, and is now available for use in Final Cut Pro X and Sony Vegas.

Denoiser II is your solution for fast reliable video noise reduction – with no fuss. Just apply Denoiser and your footage instantly looks better.

The Magic Bullet Suite also includes LUT Buddy – a tool for creating, importing and exporting Look Up Tables to and from your editing timeline. It allows you to share color decisions with LUT compliant devices and software – so you can take your color ideas anywhere.

Magic Bullet Film: Before & After 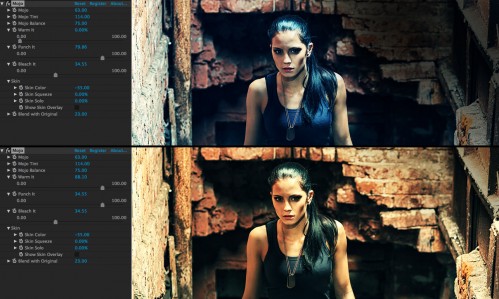 Red Pledge is Red Giant’s commitment to customer happiness, with no purchasing hassles. Learn about the Red Pledge guarantee at redgiant.com/redpledge/.

Red Giant is a software company made up of talented artists and technologists who collaborate to create unique tools for filmmakers, editors, VFX artists, and motion designers. Our company culture is focused on finding balance between work and life – we call it “the double bottom line” – this philosophy helps us ignore complexity in favor of building simple tools that yield giant results. Over the last decade, our products (like Magic Bullet, Trapcode, and PluralEyes) have become the standard in film and broadcast post-production – With over 200,000 users, it’s nearly impossible to watch 20 minutes of TV without seeing our software in use. From our experiences as artists and filmmakers, we aspire not only to provide tools for artists, but inspiration as well. Watch our films, learn from over 200 free tutorials, or try our software at redgiant.com.