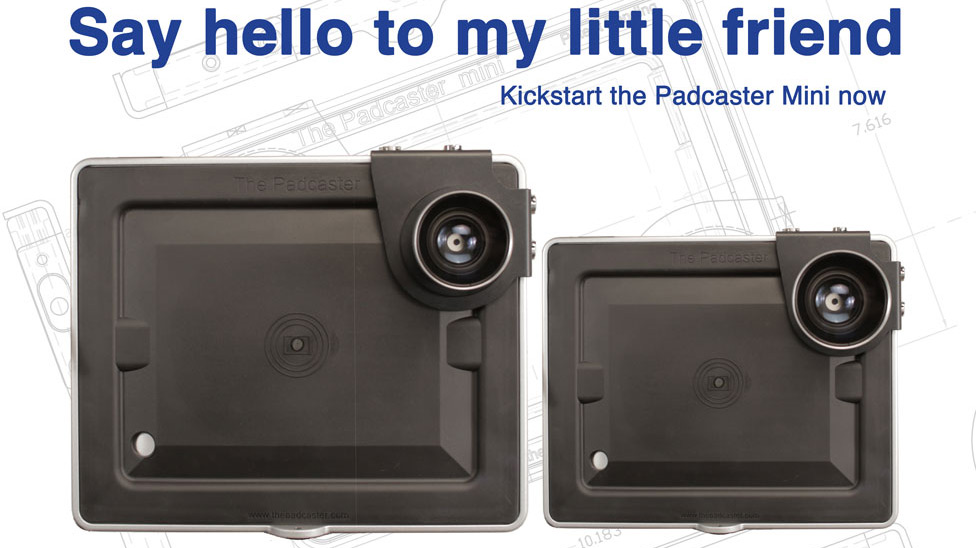 The creators of the Padcaster, a revolutionary iPad case that transforms the tablet into an on-the-go production studio, plan to bring the versatile filmmaking accessory to the iPad mini. Since its official launch just over a year ago, the Padcaster has been named one of “12 unusual gadgets that you’ll love” by CNET, among many other accolades. With the help of dedicated backers, the forces behind the Padcaster hope to create yet another gadget you’ll love – the Padcaster Mini. Employing the popular crowdfunding platform Kickstarter, the Padcaster will run a campaign to raise $30,000 to help fund the project. Visit the Padcaster’s Kickstarter Campaign page for more information: .

“With crowds literally following us around the show floor at NAB (National Association of Broadcasters), it was clear to us that Padcaster was striking a major chord with people,” says Josh Apter, founder, The Padcaster. “I’m happy to say, after one year, the excitement and interest has turned into a successful business that has well surpassed our expectations. The response has been great – from the enthusiastic reactions we get when shooting on the streets or at events to the really positive reviews from industry professionals. One of the biggest questions we always get asked is – ‘When is there going to be one for the iPad mini?’ We hope that, the next time someone asks this, we can tell them it’s on its way.”

While development for the Padcaster Mini is already underway, the Padcaster team is looking to fast track the expensive manufacturing, prototyping and initial production process with funds from the Kickstarter program. The team also hopes the additional funds will aid them in the continuous production of the regular Padcaster, which will be updated to version 2.0 just in time for the campaign.

More On the Padcaster
The Padcaster has received rave reviews among consumer and professional industry media alike. A tool that makes the iPad an all-in-one content-creating machine, the Padcaster continues to be recognized by many for its unique ability to transform the iPad into an even cooler, more capable device.

“The Padcaster is one of those accessories that pushes the Apple iPad beyond what most people do or would think of doing with it. It takes iPad Videography to the next level.” – Joshua Goldman, CNET

“Anyone who is interested in using an iPad for filmmaking or broadcasting – either as an amateur or professionally – should consider getting the Padcaster. It’s a brilliantly conceived and well-built accessory that should be extremely popular with the video and filmmaking crowd.” – Steve Sande, TUAW

“The iPad is an amazing tool for shooting photos and video. It’s not a case. It’s not a fashion statement. It’s a tool, a piece of pro-level gear. And for the people who recognize that, the Padcaster is an equally amazing, though simple way for them to use it for video production.” – Bill Stiteler, Technology Tell

About The Padcaster
The Padcaster transforms an iPad into an on-the-go production studio, providing an easy and professional way for users to create stunning videos on the iPad. Perfect for professional and amateur videographers alike, the Padcaster is an aluminum frame with a urethane insert that snugly holds the iPad for a secure and solid feel. Threaded holes lining the edges of the frame allow filmmakers to attach external mics, lights and countless other accessories to enhance the finished product. A standard ¼-20 screw thread and locking-pin design centered on the bottom of the Padcaster lets users connect it to a professional tripod, monopod or shoulder mount for easy, smooth filming. Additional lenses can be attached via the Lenscaster, a separate accessory, to create a wider field of view or bring telephoto capabilities to the iPad’s fixed lens.

The Padcaster’s aluminum frame can also be used as a standalone DSLR cage. Filmmakers can rig a DSLR or other video camera into the cage, enabling them to attach numerous accessories to enhance their shoot.

About The Padcaster, LLC
Headquartered in New York’s Flatiron District, The Padcaster LLC is an innovative startup aimed at developing tools for filmmakers and videographers of all stages of development and skill levels. Established in 2012, its flagship title product, the Padcaster, is a multifunctional iPad case that takes users from passive consumer to creative filmmaker. The Padcaster was made by and for videographers to fit the needs of just about any filmmaker working with the ever-expanding set of production tools and technology.