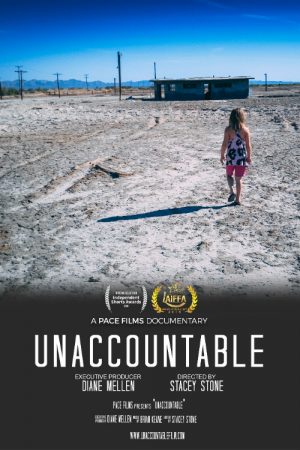 In the 1950’s, the Salton Sea–created by flood overflow from the Colorado River decades earlier–was an oasis in the middle of the Southern California desert.  The large inland body of water became a tourist destination, a place where families would enjoy the cool, clean water and sunshine. However, a lack of outflow caused a slow rise in salinity of the water- proving deadly to the fish and birds there.  This, combined with polluted runoff from nearby farms, made the once idyllic Salton Sea barren and desolate, incapable of supporting life. “Unaccountable”, the latest documentary by director Stacey Stone, takes a reflective, melancholy look at both of these periods in the Salton Sea’s history.

Stone and producer Diane Mellen take a poetic, imagery-filled approach to telling the story of the deterioration of the Salton Sea.  The film begins with what sounds like an original audio recording from the 1950s advertising the Salton Sea as a vacation destination.  Accompanied by period-appropriate background music, the narrator gives an overview of the many amenities that the destination has to offer, while archival footage showcases families playing in the water, relaxing on the beach, and having a great time.  This works extremely well as exposition. It doesn’t feel like standard documentary exposition, with talking heads providing all of the necessary information. Instead, it transports the viewer back in time. While watching this, I felt I was experiencing the advertisements for the vacation destination in my normal, everyday life.  And the longer the archival footage played, the more I started to live the experience. This method of storytelling proved extremely effective.

The impact only increases when the film cuts from showing these idyllic 50s scenes to depicting the barren reality of today.  When the first sweeping aerial shots of the now-decrepit Salton Sea regions appear, the effect is stunning. There’s simply nothing alive to be seen.  Again, the filmmakers lean more heavily on imagery than dialogue to tell their story. The shots of the barren shores, seemingly fossilized fish and birds, and the decrepit buildings all paint a picture of decay, of vacancy, of life long gone.  Stone, Mellen, and the rest of the team did an excellent job capturing and communicating these emotions.

Furthermore, by employing some sparse narration in the second, present-day half of the piece, the filmmakers also manage to educate the viewer a little bit on the daily lives of the small population of humans that still reside in the Salton Sea region.  A girl speaks about her daily life, and provides details that feel ripped out of a science-fiction novel, such as red flags that warn children when the air quality is too toxic for outdoor play, or tales of two-headed turtles and three-eyed fish that have mutated in the contaminated Salton water.  These details, supplemented by text at the end of the film, truly shocked me and cause me to wonder about the future of the Salton Sea. Overall, the filmmakers have told a story that seems to want to continue outside of the bounds of the film, which can be a rare feat. I definitely wanted to learn more after viewing.

The filmmakers take great advantage of the imagery present at the Salton Sea.  As mentioned above, shots of the water, the desolate beaches, and the old abandoned structures tell nearly the entire story without words.  These shots are all pretty well exposed. At times, some of the camerawork feels a little jumpier than it could have been. Since there were no actors, interviews, or improvised moments that needed to be captured, I felt that a little extra time could have been taken to refine some of the camerawork- particularly the shots that move through abandoned buildings.  Overall though, the photography was well handled.

Sound also contributes to the story. Well-selected music compliments the mood of the imagery without feeling forced or overbearing.  The noises of cloth flapping in the wind or the faint cries of birds in the distance also occasionally crop up, providing brief interruptions to the silence of the desolation.  Finally, as noted above, a narrator fills in details that are not apparent by the footage alone. This works very well most of the time. A few comments do feel unnecessary because the images work so well, but overall this added dialogue fulfils its purpose.

Editing can make or break a tone poem like this one, and fortunately, the team here does a good job overall. Cutting lively imagery from the past directly up against the barren reality of the present- a device used quite a bit- works very well to emphasize the decay of the area, and draws an emotional response from viewers.  While I do feel that a few passages of the film could have been trimmed down even more for greater effect, the piece does have a good flow overall.

In the 1950s, the Salton Sea was a very popular tourist attraction in the middle of the Southern California desert

Today, however, it is empty and barren 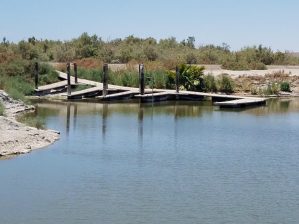 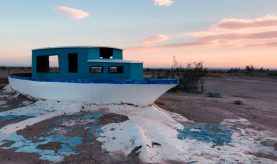 The area can even be toxic for humans in high winds, and the water can no longer be ventured into 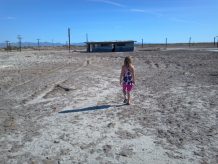 There is an incredible contrast between the memories of an area once full of life, and the current, desolate reality.

Stone and her collaborators used interesting techniques to tell an emotional story.  The film accomplishes its intention with a fairly short running time. I felt very interested most of the time, and even when the film slowed down, I never felt the urge to stop watching.

With Unaccountable, Stone, Mellen, and the rest of their team have taken a somewhat new approach to create another very engaging documentary with an emotional core.  I would recommend this one to friends, and am very much looking forward to their next production!


8.5 – Worth watching at festivals, at home, and highly recommended!

Manuel Crosby is a filmmaker currently based in Northern California. As a cinematographer and editor, he works with other filmmakers throughout California. Also, as a writer and director he creates many short films available on his Youtube channel and at http://manuelcrosby.com/, including the western "Dead Man's Locket" and the thriller "Precaution". Finally, he is a longtime volunteer at Calaveras County Public Access Television. Manuel is currently working on his feature length co-directing debut: a dark-comedy, coming-of-age thriller called "First Date".