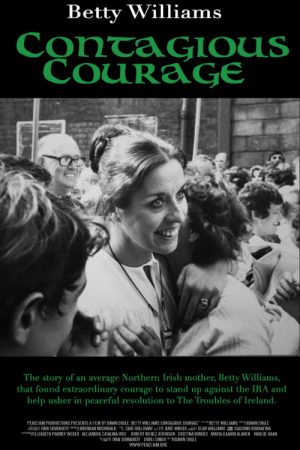 Chaos filled the streets of Northern Ireland in the 1970s.  Shootings, car bombings, and civilian death became the norm for citizens living through a time known as “The Troubles”.  The strife stemmed from fierce disagreement, both political and religious, between the Protestants and Catholics. No one was safe from this violence.  But for Betty Williams, the firsthand experience of living through violence served as a call to action. She made it her life’s mission to spread peace and protect children in the face of unrest- both in her turbulent home nation and around the globe.  The documentary film Betty Williams:  Contagious Courage, directed by Dawn Gifford Engle, documents Betty’s journey along with the events that sparked her struggle for peace.

Engle and her filmmaking team walk the viewer through many incidents of violence and death during “The Troubles” in Northern Ireland, and outline the religious and political tensions that led to the bloodshed in the first place.  After witnessing tragedy after tragedy, including the deaths of several children, Betty Williams, a local citizen, realized she needed to push for a change, and began organizing a movement called “Peace People”. It took years for her efforts to fully bring an end to the conflict, but she and her collaborators ultimately helped usher in a peace agreement, called the Good Friday Agreement, in the 1990s.  In 1976, right in the middle of her tireless work, she, along with her collaborator Mairead Corrigan, received the Nobel Peace Prize. This film does offer quite a bit of history about the 1960s, 70s, and 80s in Northern Ireland, which does help to orient and educate the viewer. It grants more understanding to the unfamiliar audience member as to why these incredibly violent confrontations ever began.

This film covers many tragic instances of bloodshed, showing what Betty went up against as she tirelessly protested the violence.  There is no doubt that Betty held a key role in preventing civil war and ushering in peace. Yet, for the first two-thirds of the runtime, the documentary seemed more focused on the historical events at large, sacrificing a personal perspective.  This trade-off gives the viewer less understanding of Betty’s specific struggles, and leaves out most of her personal life and experiences that made her into the activist she would become. Thankfully, the film did shift its focus more onto Betty near the end.  This allowed me to really enter into her perspective, and become emotionally attached. Her beliefs about spreading peace and protecting children, along with her stories, created a very moving experience when they were given due time on screen. 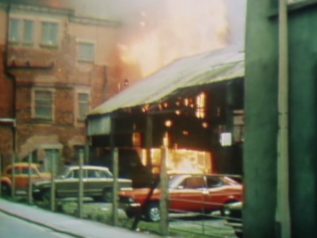 In the 1970s, violent confrontations between Protestants and Catholics flooded the streets of Northern Ireland.

Betty Williams dedicated herself to halting this violence and restoring peace to the region.

She organized a movement called “Peace People”, which began as a group of women who were no longer willing to stand for the deaths of their children and loved ones. 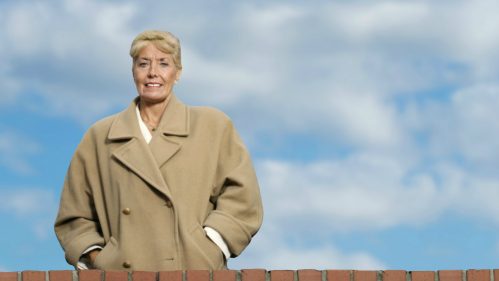 She would go on to promote peace worldwide, with a special focus on the protection of children.

Overall, the filmmakers did a good job with the technical values.  The vast majority of the film consists of archival footage, which helps flesh out all of the details and even shows Betty and her other collaborators in their younger years.  While a few of the present day interview shots of Betty were out of focus, most of the coverage looked sharp and well-lit.

The recorded sound quality was very good.  The narration and the interviews with Betty were very clear and clean.  Additionally, the filmmakers incorporated some good music tracks- though these tracks were occasionally overused.  I wish that the filmmakers would have allowed the words of Betty and the narration to have more impact on their own during certain passages, without musical backing.

The editors did a good job of piecing together the wide array of footage sources.  The archival footage really roots the viewer in the harsh reality of these events. However, as mentioned above, I do feel that the edit could have swayed even more towards Betty’s personal experiences in the first two-thirds of the film to create an even stronger documentary.  Some longer segments involving the history of the region in terms of political and religious conflict that, while educational, did not hook me emotionally as much as the simple conversations with Betty and archival footage of her other speeches and interviews.

This film, along with the other Peacejam documentaries focusing on Nobel laureates, contains a positive and powerful message.  It is very nice to see people who dedicate their lives to bringing peace to their fellow citizens of the world. However, my interest level did slowly drop throughout, due to the lack of focus on Betty as an individual.  In the final third, when the film really began to flesh her out more, my interest returned and reached its peak.

Betty Williams:  Contagious Courage documents a time of great suffering and turmoil for Ireland, and shows how a determined woman dedicated her life to healing and restoring peace.  Betty has clearly lived an inspirational life, and though the film sometimes lacks a focus on her, the glimpses they do provide of the woman behind the movement will powerfully affect anyone who watches.