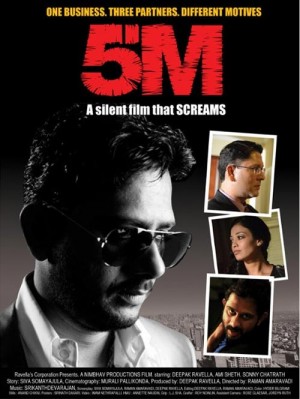 When he’s in danger of losing his business in the recession, Dave (Deepak Ravella) comes up with a dangerous criminal scheme with his partner Sonny (Sonny Chatrath) and his wife Amy (Ami Sheth) to gain $5 million through cheating the insurance company. But when things go off the rails, they plunge toward the depths of murder and betrayal.

While I wanted to like this story, because of the noir flavor of it, I just couldn’t get into it. The choice to make this a silent film (but without most of the things which make a silent film effective) made the complexity of the story harder to follow than it needed to be.

He dreams of getting ahead and winning.

To succeed, he just needs to be creative.

He can turn a liability into a way out.

But he’ll have to convince his wife and partner to help him.

Even as he suspects them of cheating on him.

Whenever you watch an experimental film, I give it some extra slack because I know the filmmakers are trying something new, attempting to make a different take on the art. With that said, the choice to make this a silent film wasn’t a problem, but the choice to have it in color (when there were inconsistent color grading that distracted), to add in sound effects (which just pulled me out of the story), the choice to use over-the-top melodramatic pantomime (which felt like the William Shatner-version of Charades), the decision to use oversized props (like a check the size of a publisher’s clearinghouse grand prize delivery), and the choice to not use title cards led to something that I found too hard to watch.

My overview in watchability describes the issues that kept bucking me out of the narrative.

If you can get through the anomalies in this film, I suspect you’ll get an interesting ride with 5M. However, from my perspective, when you reinvent the wheel for a genre, sometimes you come up with a square wheel, which is what happened here.

[Editor’s Note: When we do Straight Shooter Reviews, we do them after one attempted watching, as they’re designed to replicate a film fan watching the film and what they will sit through while still staying engaged. I’ve since gone on to critique the film, so have finished watching the film multiple times, and can confirm the ending is cool, but the other issues that prevented me from initially finishing the film remain.-JH]


5.0 – Interesting arthouse project that ultimately falls apart due to presentation.