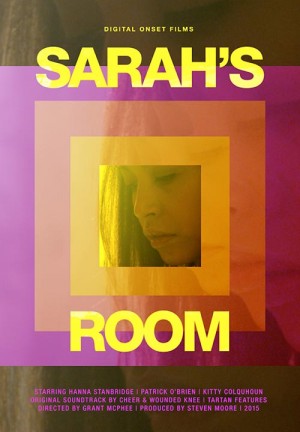 Joe (Patrick O’Brien) is a reclusive man with dark secrets in his past, psychological problems, and addictions he wallows in. To help with the cost of their home—and to help keep her spirits up—Joe’s wife, Hannah (Kitty Colquhoun), invites her best friend, Sarah (Hanna Stanbridge), to move in as a housemate with them. However, when Sarah moves in, Joe’s world crashes down around him as he becomes lost in a world of visions, dreams, and confusion which might have something to do with drug use, mental issues, witchcraft, infidelity, obsession, sleepwalking—or none of the above.

‘Psychedelic Madness!’ is the catch phrase the filmmakers use to describe this film on IndieFlix and, in this regard, they are dead on the money!

While the filmmakers tried to give this film the genre of “Horror/Ambient”–a genre that doesn’t exist–the reality is  that this is not any form of horror film, but is a very experimental art film.  (Although, the fact that the film starts VERY slowly, uses lots of trance style music, and doesn’t actually hint at any form of overarching story until nearly 38 minutes into the film might argue for the use of “Ambient” as an add-on to the genre!)

As far as story goes, this film has about a thirty minutes of actual narrative separated by fifty minutes of strange dreams, hallucinations, and incongruous imagery, concluding with an ending that will leave many saying, “WTF??” From a story perspective, it’s a mess. However, despite that, it does have some things going for it which we’ll get into below.

While the story of this film is an objective mess, somehow the rest of the film manages to be a strangely beautiful mess.

The acting is actually quite good from the three main characters in the film and the cinematography—especially in the visions and hallucinations—is quite arresting and beautiful. The dialogue audio was pretty clean and easy to understand, with some of the music for the score being quite good—even if some other parts of seemed to have been intentionally played backwards and amped through a PA system.

Joe thought he and Emma were happy…

But then Sarah came into his house.

As he finds he’s unable to sleep and caught in a dream world.

A world in which he longs to see…

…The forbidden world of Sarah’s Room!

Despite the story blunders and the “art-for-the-sake-of-art”  mentality of this film, there were enough flashes of genius and beauty to keep me watching every time I was tempted to turn this film off due to its story issues—or to fall asleep due to its pacing issues.

As much as this film frustrated me due to its sheer subjectivity and made me want to rant against it, the fact is: Sarah’s Room is created to the objective levels needed for it to enter the world of art, where it has the right to be completely subjective. It is not a horror film; it is an experimental film for lovers of arthouse cinema.

6.0 – Very niche audience will enjoy this as is; recreational drug users will enjoy it with hallucinogenics of their choice!