Daniel (Even Fielding) makes a poor decision about illumination in his home one night and ends up with a house fire. Scared to deal with the repercussions, he runs away, learning about the real world through a series of providential encounters, one of which provides him with a copy of the aforementioned Gideon’s Bible. The Bible goes on to Alex (BK Bomar), a detective who helped Daniel find his parents, then the narrative follows him as he and his wife lose a child and are forced to struggle with their pain. From here it moves on to a homeless woman, a preacher’s daughter, an overworked waitress, and so on.

This film is designed for a Christian audience, so it will be less easily understood by those outside that audience.  (With that said, those unfamiliar with Christian ideas can usually pick up the gist of things through the use of close ups on passages in the Bible or from the message signs of a street-preacher, who is holding a new sign for every person who passes him by.)

With that said, the storytelling in The Good Book is actually more complex than in most faith-based works, for which it should be applauded. Most modern Christian works tend to be very fond of extremely black and white concepts and very closed, simplistic endings, so I appreciate that Whilarm chose to look at messier lives in this film. In addition, the ending is actually more open ended than many of these types of films. In both regards, it reminded me somewhat of the Richard Linklater film, Slacker, which uses the conversations of different townspeople as a way to pass the narrative along. (Fortunately, in my opinion, it’s not as random in its exit point as Linklater’s Slacker is.)

The silent acting is actually pretty effective in this film—which can be very difficult in a dramatic work, considering how much traditional silent film used melodrama and lighter subject matters because of the absurdity of complete silence. However, this could be further improved with two “requisite” elements of feature length silent films: the addition of Title cards for conversations and the identifying Name Cards as we first meet a person (ala Lock, Stock, & Two Smoking Barrels).

Despite the great work in this film, the film does have a notable misstep: its length.

62 minutes is a strange length for any film—too short to be a true feature and too long to be a short. If this film were shortened to 20 minutes, then then lack of title cards and identifiers could be overlooked, as it would feel more like an extended music video—allowing the focus to be on key dramatic moments and glossing over slower parts where the audience’s attention wanes. Conversely, if the film truly wants to be a feature, then it really needs title cards for conversational high points and 70 to 80 minutes is a better length for them to extend it to. While reworking one’s soundtrack is a colossal pain, the actual additional movie time would likely be fully covered by the simple addition of the conversational title cards at the necessary length to be read and understood by the audience. (In regards to this, I’m reminded of Mel Gibson’s faith-based film, The Passion of the Christ. His original goal was to have the film be completely in Hebrew, Aramaic, and Greek with no subtitles because ‘the acting would conveyed things so well, subtitles would be unneeded.’ However, when the film was released, subtitles were fully present because, regardless of his desire to stick with a certain artistic theme, the ability of the audience to clearly understand one’s story must be paramount.)

…Daniel decides to run away.

Daniel is befriended by an unlikely helper…

…and he receives the Bible that the narrative will follow.

When a homeless woman discovers the Bible…

…She’s inspired to seek help at a local church. 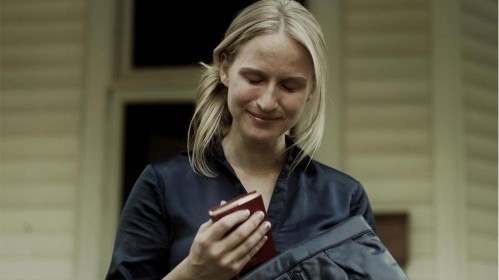 With each person, the book is passed along the chain.

The visual style of this film is actually really quite good. Shot with a Sony FS-700 Super-35 cinema camera and Nikkor lenses on both a Blackbird Stabilizer and a CamCrane, the footage is great and the editing is really solid. Additionally, the use of the FS-700’s burst mode slow motion (240 fps, which is 10 times the normal 24 fps film standard) during emotional moments or during times of a lot of physical motion gave many scenes a lot of emotional impact, without post-production slow-mo artifacts to distract the viewer (which always happens, to some extent, when you artificially increase the frame rate after shooting). DP Fred Wilharn has a lot to be proud of in this.

With that said, the one thing to work on for future films would be lighting when working with darker-complected actors, like BK Bomar—who sometimes got swallowed in darkness during scenes with other actors. Skin shade variations between actors in a scene and how this effects lighting is actually a very complex conundrum throughout filmmaking. For future films, staging the darker-skinned actors closer to your light source and the lighter-skinned actors further from the light source is usually the best course of action. (Even with that being done, you often have to compromise both skin tones during the actual production, slightly underlighting the darker skin tone and slightly overlighting the lighter skin tone, then adjusting things in After Effects or Color with motion masks to brighten darker skins and tone down overlit skins.  Times like that virtually necessitate shooting those scenes in RAW, so you have the dynamic latitude to accomplish this.)

The music from Rick Holets is really well composed. While there were a few times the score got a little “on the nose” (for lack of a better phrase), it was normally subtle enough to not be too overt, yet powerful enough to be the sole audio component of the film.

Less than $11K for an hour long film with this kind of look, score, and production value is pretty strong. With most of the creatives being paid–aside from the director and her husband–this is a very reasonable microbudget film that is designed for a specific audience and has a pre-existing distribution arrangement in place.

Lasting appeal is a little tricky on this film. While my beliefs put me into the target audience for this and I did appreciate watching it through, in its current state, its rewatchability for me isn’t really high, nor is it probably one I’d show a lot of people. With that said, if name and title cards are added, that could greatly increase both facets.

For the audience it’s intended for, The Good Book shows a lot of promise. If it were to firm up whether it’s a short or a feature, either by creating a 20 minute edit or adding Title Cards and extending it to 70 or 80 minutes, I feel like it would deliver on more of that promise. Regardless, The Good Book is a compelling take on the impact of one of the most pivotal religious books in human history.  I look forward to seeing what future films Ms. Wilharm and team set their hands to!