To Turn Back Time: The Making of Neil Oseman’s Stop/Eject (Article)

A New Year’s resolution in 2011 to create a new film plot every day led Neil Oseman to the inspiration for Stop/Eject. One script idea involved a tape recorder that could turn back time. Oseman partnered with Tommy Draper and together they produced a twenty page script. The story involves a young couple who visit a charity shop in the town of Belper in Derbyshire, England. The husband goes outside to answer his phone and is struck by a car as he is crossing the street. As the widow grieves inside the shop, she discovers a tape recorder, and learns she can rewind time. She desperately seeks the tape that will rewind the events of that day. 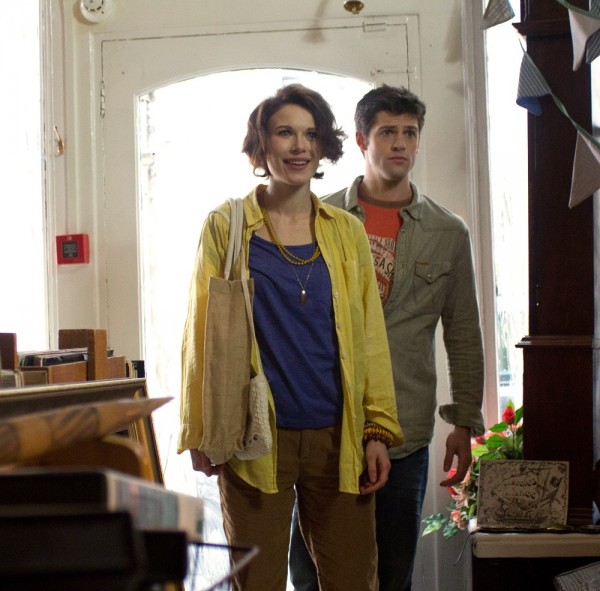 After carefully estimating the production costs for the film running less than twenty minutes, Oseman established the modest budget of £2000. His producer and production designer, Sophie Black, suggested using Crowdfunder.co.uk. They put together the fundraising video describing the storyline and the various levels of rewards for their donations. The campaign successfully raised over £2100.

Oseman ran a second smaller campaign to cover post-production work. For a third and final campaign, he used Kickstarter.com with a goal of £400 but quickly pulled in £600. He recounts these efforts in the video below:

Principal photography began in April 2012. For this film, he used a Canon 600D video DSLR camera. For many of the exterior shots, he employed a Hague jib arm for the Canon. Dialog was recorded using a muffed microphone on a handheld Rode boom. Reflectors were used for fill lighting outdoors when needed, while for lighting interior scenes, which Oseman is known for his expertise in, he used carefully placed lighting with the necessary gels. (On his films today, Oseman owns and operates a Black Magic Production Camera 4K.) 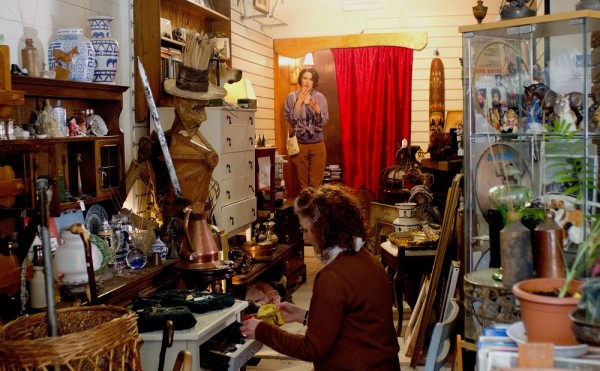 Production Designer and Producer Sophie Black carefully selected and positioned every prop in this scene in the charity shop from Stop/Eject. (Photo: Paul Bednall)

Production Designer Sophie Black spent considerable time designing each interior set. She thought through the rationale for the props and how they tied into the story. She made her own color sketches of the sets, and gave the explanation to Oseman to critique during production meetings. Once these were agreed on, she and her assistants carefully replicated the sketched design. Most challenging was the charity shop interior. This set also included the booth in the back of the shop which served as the time portal where the tape recorder was kept. The booth could be knocked down and transported to the exterior location called for in the script and reassembled before filming.

In the basement of the shop, Black discovered a fascinating series of supporting stepped-pyramid columns. Between these columns she placed racks filled with hundreds of the 90-minute tapes of time going back for years. Her attention to detail extended to recording the exact date and time on the spline of each tape.

Oseman reached out to his contacts in the filmmaking community, some of whom he had worked with before. Katharine Lake was costume designer on Stop/Eject. She carefully selected or made the costumes for each character based on their role and their personality. Lake particularly enjoyed dressing Therese Collins as the charity shopkeeper and paid close attention to makeup and hair. 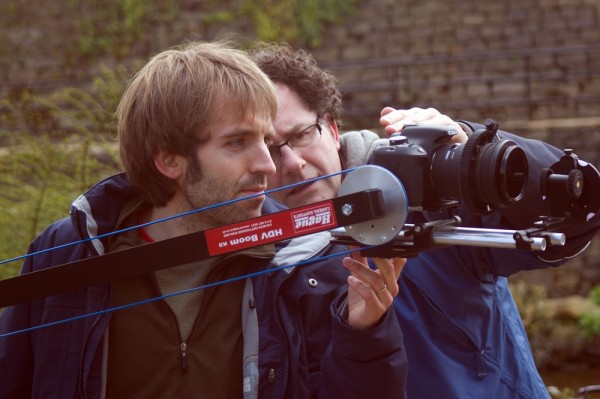 Oseman revealed how he was able to make such an impressive-looking film with engineered sound and appropriate music on such a low budget.

“None of the cast or crew were paid at any stage of making Stop/Eject,” he admitted. “The VFX artists worked on their home computers, editor Miquel Ferros used his own Mac-based Avid system, colourist Michael Stirling used his company’s DaVinci resolve projection grading suite, sound editor and designer Henning Knoepfel used his own Mac for the audio work and pulled in a favor to get a free studio day for the ADR, and re-recording mixer Jose Pereira used the studio at the college where he lectures. Scott Benzie composed the music in his home studio and we recorded it for free with four live players at Worcester Tech College.”

The real test of a completed film short like Stop/Eject is the selection for inclusion in film festivals, no matter how vaunted or obscure. Being selected for showing is incredibly prestigious and of great pride to the filmmaker. Many film festivals receive between 2000 to 3000 entries. From these, typically less than 100 are screened. Oseman has been actively campaigning his film since its completion in 2013. Stop/Eject was premiered at the Raindance Film Festival in London in September. This made the film eligible for the British Independent Film Awards. 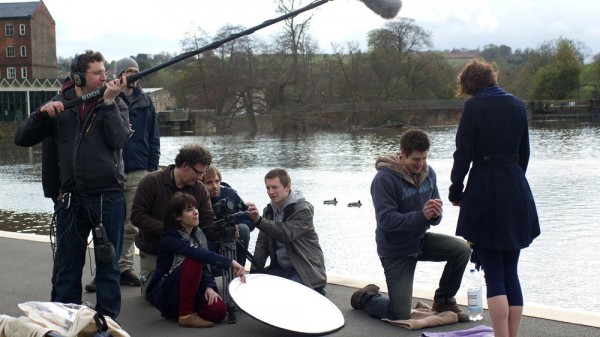 Georgina Sherrington and Oliver Park rehearse lines for a scene with coats on to protect them from the chill. Just before filming, they removed them. (Photo: Paul Bednall)

Stop/Eject has received a four out of five star review from James Cherry of The London Film Review. In part, Cherry wrote: “Director Neil Oseman crafts a wonderful visual setting with impressive cinematography and time-based effects, all underlined and supported by high-caliber acting and story. Well-written, well-executed, and a genuine pleasure to watch, Stop/Eject is short film making at very close to its finest level—high concept, but not in the slightest betrayed by its small production scale. A must-see for aspiring short film producers.”

Oseman is one of England’s finest microfilmmakers, and he willingly shares all his experiences and filming tips on his content-rich site: http://neiloseman.com/