Between the Scenes (Book Review)

Book Review
Between the Scenes:
What Every Film Director, Writer, and Editor
Should Know About Scene Transitions 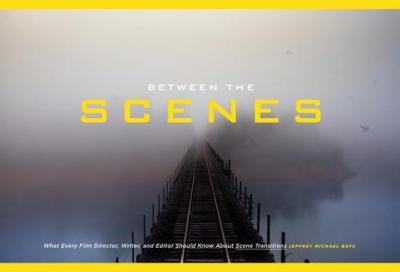 Between the Scenes takes you through the art and practice of scene transitions. The running theme is how scenes connect and how your film and content flows. The book does not target a specific group as the goal is to bring consideration of transitions to all stages of film production. There are sections for writers, directors and editors. I just have to comment, I like the shape of the book (I reviewed the paperback format). As I took the book out of the shipping package, it’s shape instantly reminded me of a single cell of film, which, considering the topic, put me in the right “frame” of mind (I promise, that is my one and only attempt at a pun).

The book is meant to be read by writers, directors, and editors. Bays didn’t want to target just one group, emphasizing that scene transitions should be considered at all points throughout a film’s creation. I fall into the writers’ group. I found the content easy to follow and apply to my area of focus.  Bays does not shy away from terminology, but defines terms and methods as well as providing examples that clarify potential grey areas. The chapters are broken into sections that can easily be used as talking points and keeps the reader focused on one specific idea.

The first chapter reviews the concept of a scene transition. From there, each chapter takes a look at a specific type, form or method for tying your film together. Most chapters start with three overviews on the topic; one addressing writers, one for directors, and one to editors. I loved these short, to the point, summations about how each aspect of film production is influenced by the different techniques. A great example of this is found in the chapter about motion. He gives tips to writers and directors for the overall technique, then starts the editor’s section with, “There’s probably not much you can do about this by the time the film gets to the editing room, but…”. After introducing the basic theme, the chapter is filled with film examples and methods. For instance, the Music and Transitions chapter moves from discussing the mechanical uses of music and the power of silence, into concepts such as variations of transformation tactics, the role of lyrics and using pre-recorded songs.

In the introduction, he lays out the underlying theme of Between the Scenes, “This Book is about style. It is about shaping the content that is already in your script.” Using images, headers, font changes and a two text column format, the author keeps the content spaced avoiding a claustrophobic feel. In modelling the theme, transitions, Bays uses transitions in his text to move between sections and chapters. I also found the examples to be diverse and entertaining. He draws on classics, modern films and shorts to provide examples of what works and what does not work in terms of transitions.

This is a once through, then occasional refresher type of book.  You will consume the content the first time, noting techniques, examples and making a few notes to follow up on topics. Then the book will go on the shelf until you are starting your next project, at which time you pull it out, paging through it to remind you of the details and refresh your memory. This is also a great book to give someone starting out in film or to use as a discussion starter for bringing writers, directors and editors together.

For someone new to the field, this is a great resource and summary of scene transitions.  It’s well worth the purchase, as it has the highest value. A seasoned professional will find some new techniques and examples perhaps not previously encountered.  Between the Scenes is especially useful for writers and directors as transitions should be considered and planned from the first scripted word to the final edited cut. If the writer and director consider the techniques Bays discusses, the money and time saved in editing is worth more than the cost of the book.

Jeffrey Bays takes, as he writes, “those little things that connect my scenes”, and brings them front and center. I love the way he brings transitions to writers, directors and editors, demonstrating not only how important they are, but how each stage of the film process needs to consider transitions as a valuable piece of the overall finished product.