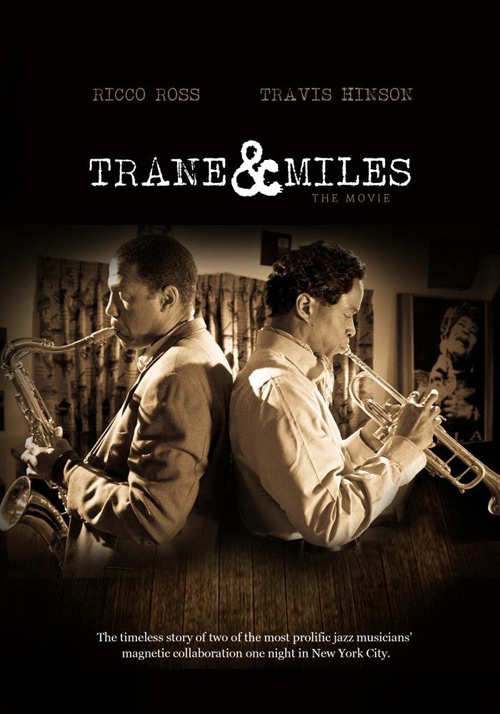 March 2nd and April 22nd of 1959, Miles Davis and John Coltrane teamed up to record “Kind of Blue,” an album that would become one of the best-selling jazz albums of all time and would mold the sound of most of the jazz that came after.

Trane & Miles tells a possible tale of these momentous recording sessions between these iconic musicians from the fictionalized perspective of a post-life Miles Davis, who’s had some time to reflect on things and really focus on his most endearing memories.

The storytelling model of Trane & Miles is through direct monologue from the future Miles Davis and flashback to his recollections, reflect the factual events of the recording sessions. The pacing is intentionally slow to tie in with both the music and the idea that the “Kind of Blue” sessions were the birth of “cool jazz.”

The actual story arch looks not only at these sessions but also at the way in which Miles Davis’ influence and help had impacted John Coltrane’s career. As with so many mentor relationships, eventually it was necessary for them to part ways and, after “Kind of Blue,” Coltrane would leave Columbia as a session player to go to Atlantic Records.

Miles Davis remembers his time with John Coltrane with fondness.

Once you got used to the cadence of the characters being portrayed, the acting was really solid for the two leads. Travis Hinson  did a very believable job playing both a young Miles Davis and, with the help of some really well done makeup, the older version. Ricco Ross played a very strong and conflicted John Coltraine. While some of the secondary actors weren’t quite as strong, the strength of the main actors helped prevent anything getting off course.

The script really explores a very interesting place in American music. Additionally, the ending to the film makes sense with the overall story being told—it’s not designed to drop any cannonballs, but it does a nice job of a “what-if” retrospective. (And probably does less fictionalizing than the recent film, “Saving Mr. Banks,” at least as far as the ending goes.)

Despite all the really great things in this film, there are some issues with the pacing—especially in the flashback sequences, which retains a cool jazz soundtrack. I totally can understand the goal of having everything reflect a cool jazz concept, but by having the dialogue and editing all moving to the very slow beat of cool jazz, it actually creates a non-tension that seems almost “anti-jazz.”

While my knowledge of early jazz is admittedly limited, my understanding is that the best jazz music always incorporated an unpredictable pressure as very talented artists would essentially compete in solos and throughout the music, striving to push the art and the sound with every song. (Similarly, in the culinary world, the best chefs are very careful to avoid conformity of texture and flavor, but always have contrasting textures and contrasting flavors because the contrast is where the unexpected and unforgettable combinations come out.)

The dialogue in the film seems to back up this understanding of the need for contrast as session players in the recording studio talk about “cooling” off (slowing down) their parts versus others “heating up” (speeding up) their parts. Because of this dynamic tension, the recordings of “Kind of Blue” were so unique that Trane convinces Davis to see if the studio will leave an uncut version of the recording on the album—yielding another opportunity for tension to be showcased, this time between the artists and the studio.

All of these script elements are screaming for some difference—something that brings strain to the tale.

Although the film could be edited a bit tighter, I honestly think a lot of the lull is coming from just having only the cool jazz during the flashbacks. What would happen to the feel if the creative team were to put in an opposing music bed or sound effects bed, maybe something with ominous undertones, especially when they’re talking about things like dangerous addictions and other areas of tension? Or, on the opposite side, what if they were to put something unexpected into the places people expect jazz, and put in the smooth jazz when they’re talking about dangerous things? Either gives a contrast that makes the audience take notice.

(Both Fight Club and Requiem for a Dream are examples of films that use contrast in music and sound design as an incredibly powerful way to showcase tension between characters themselves and between those characters and the world they’re in—yielding really dynamic responses from the audience.)

Mr. Essman and his team shot the film with a Sony F3 and then provided post-process color grading for the flashbacks that really gave the film a saturated, buttery look that felt authentic to the late ‘50’s. The costuming and props all seemed very authentic and it’s really impressive what they were able to accomplish for this type of retrospective on such a small budget. 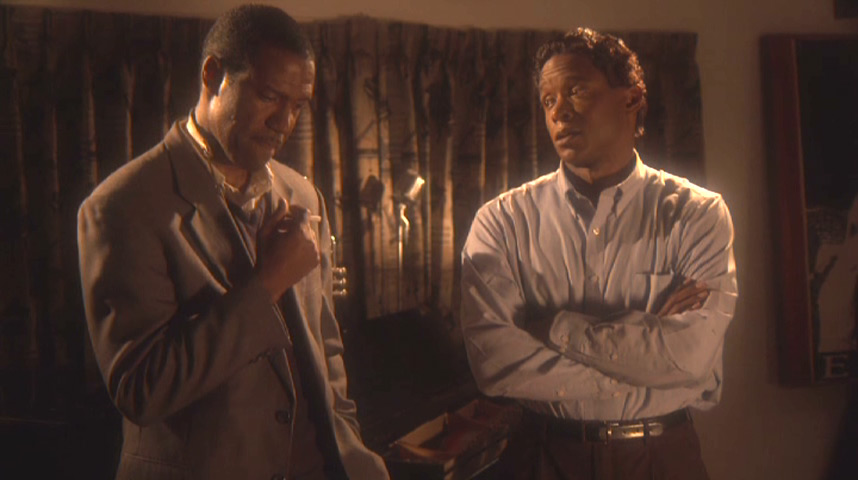 Coltrane and Davis had an interesting relationship.

Recorded with a Sennheiser shotgun on an H4N field recorder, the dialogue was clean and mixed quite well, making this a great movie to listen to as well as watch. The jazz music that was recorded for the film was really well done and even though I felt there needed to be less of it in the flashback sections, I really enjoyed that it was added. (Currently, the future Miles Davis is recorded without any background music. Perhaps the contrast I was mentioning earlier could be accomplished by having the music of his memories be the music bed in the future, but a more ominous, non-jazz track in the actual flashbacks until the flashbacks end with them playing once more on the actual album. Then the “practical” music could merge with Davis memory as the film cuts into the future.) 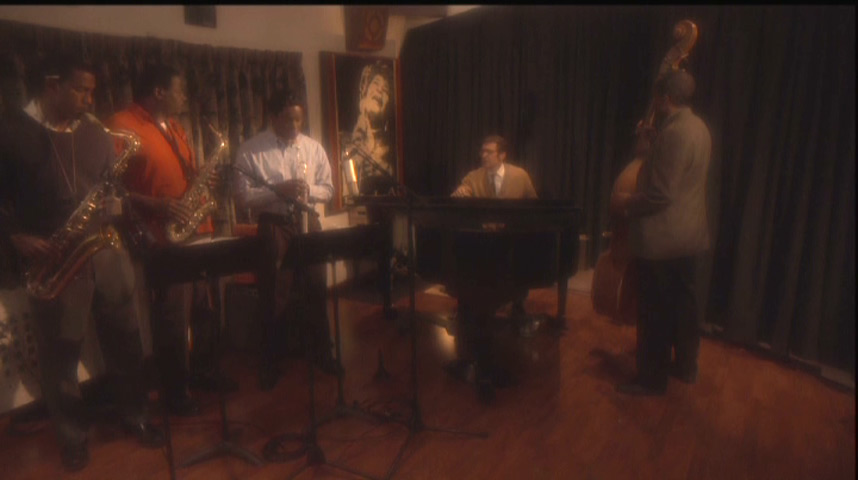 Together Coltrane and Davis would help make Kind of Blue outstanding.

A 20 minute retrospective film set in the late ‘50’s with two very strong actors and shot on a Sony F3 for $5K? Yeah, they did a pretty amazing job on budget to pull that off. My hat’s off to Mr. Essman! 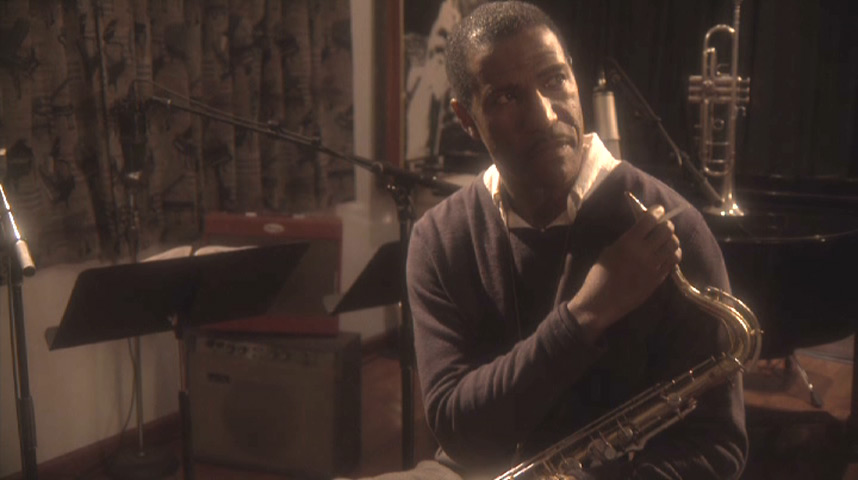 I think jazz enthusiasts would really enjoy watching this film and rewatching it due to the interesting look it provides on both Miles Davis and John Coltrane. With that said, due to the current issues with pacing, it probably wouldn’t have nearly as lasting appeal for a broader audience.

Mr. Essman and his team did a really solid job of looking at two amazing jazz musicians in Trane & Miles. It’s an interesting tale that has a lot of potential, either for a big screen conversion or for a series of short subjects about the Jazz era of the ‘50’s and ‘60’s. I look forward to seeing what Mr. Essman and his team create in the future!