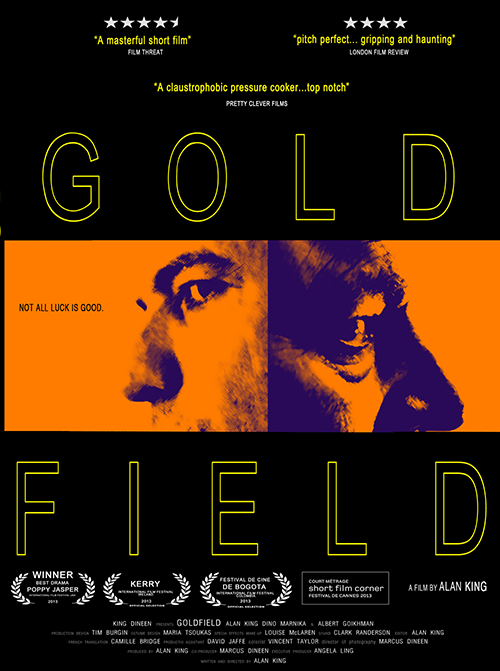 The Gold Fields of Southeastern Australia, 1853.

(While gold had been discovered in Australia before the gold rushes in America of 1848, it was kept under wraps by the regional government. However, once Australians started to leave for the Californian Gold rush, it became a bad PR move to hide the existence of Gold in Australia. Ironically, the person credited with starting the first Australian Gold rush in 1851 was a veteran of the Californian gold rush!–Wikipedia Paraphrase)

Guillaume (Dino Marnika) and his brother, Frederic (Albert Goikhman), are camping on their claim in the Australian region of Victoria. As Frederic heads off to gather more wood for the fire, Guillaume catches sight of an old acquaintance in the dark and calls out to him.

Etienne (Alan King) emerges from the surrounding thicket, stripped naked with his hands tied in front of him. Guillaume invites him to the fire and chastises him for coming back.

Beyond the initial premise of the movie, much of the content and story fall on the shoulders of the terse dialogue and the acting abilities of Marnika and King. Normally, it’s a disaster for a director to star as the lead, but King is able to do it quite well. (Interestingly, in physique and likeness, King bears a very strong resemblance to Tom Cruise—such that I actually had to do a double take as I watched the film.)

The things that I deduced from watching the film is that Etienne was Guillaume’s old partner and, to cut him out of his share of the gold (which is exemplified by one massive nugget that Guillaume protectively holds on to), Guillaume sold him to slavers (rather than kill him outright). Now Etienne is back and wants his gold back. The tension arises from what the different players are willing to do to get the gold—and whom they are willing to sacrifice in that pursuit.

The ending is perhaps less conclusive than the ending of Christopher Nolan’s Inception, but this was not out of place for the questions the film sought to ask. At the end of the day, the film sets the stage for a possible Lord of the Flies-style encounter, but leaves it to the viewer to finish the tale in his or her mind. 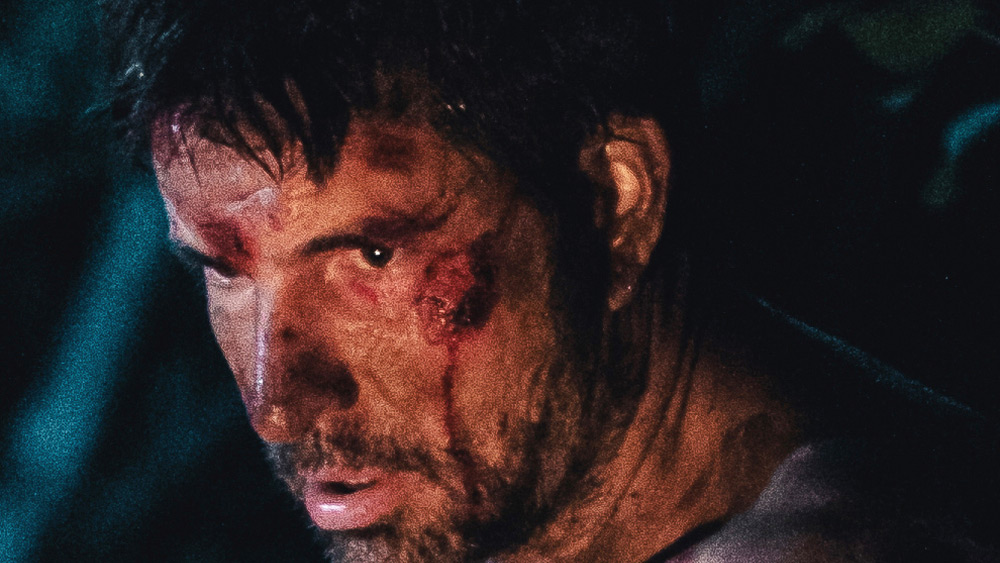 When Etienne (Alan King) returns from captivity, he is an unwelcome guest at the campfire of his old partner.

In early 2006, less than a year after MFM started, I got an email from a plugin programmer I’d met earlier about a new camera he was helping to write programming for. He said it would change everything we knew or thought we knew about what could be done on a low budget. While it was pre-NAB and he was sworn to secrecy about any details, he gave me a website to check out: red.com. The camera he was working on would later become known as the RedOne. And, true to his prediction, it did indeed change the face of Indie (and non-indie) filmmaking in many ways, as the RedOne was the first 4K camera to have a fully setup package price below $100K. And while Red as a company was unable (or, perhaps, unwilling) to follow up on the promises made to the Indie community with future cameras, the RedOne has become an affordable rental camera for many microbudget filmmakers.

Yet, because it has a learning curve that’s more comparable to a film camera than a video camera, it tends to force those who rent it to bring along people who know what they’re doing both with the camera and, interestingly enough, with the audio that accompanies it. (I notice a similar correlation with filmmakers who choose to actually shoot on film.)

Such is definitely the case with Gold Field, which is masterfully lensed by Marcus Dineen, utilizing a handheld style that is strong enough to make you feel nervous but nothing like the migraine inducing camerawork featured in the Paul Greengrass Bourne movies!

David McKenna and the gaffing team along with colorist Vincent Taylor were able to shape the light they used to really look like the firelight that was supposed to be providing the illumination, providing a distinct separation from the surrounding night until the darkness outside the camp became almost a character in its own right. (High filmic contrast helped remove any murky grays that might’ve existed and turned the night to ink.) Moreover, Dineen chose to use dominantly closed framing, so there was always a hidden world just outside of the frame that seemed perpetually in danger of attacking. (As they had to shoot the entire film in one night, it’s possible they didn’t have the time to get more establishing shots. If so, it actually worked to their advantage as the close view without reveal is much more intense and sinister.)

The overall visual look of the film actually reminded me of the classic modern western, The Assassination of Jesse James by the Coward Robert Ford, which was lensed by the incomparable Roger Deakins. 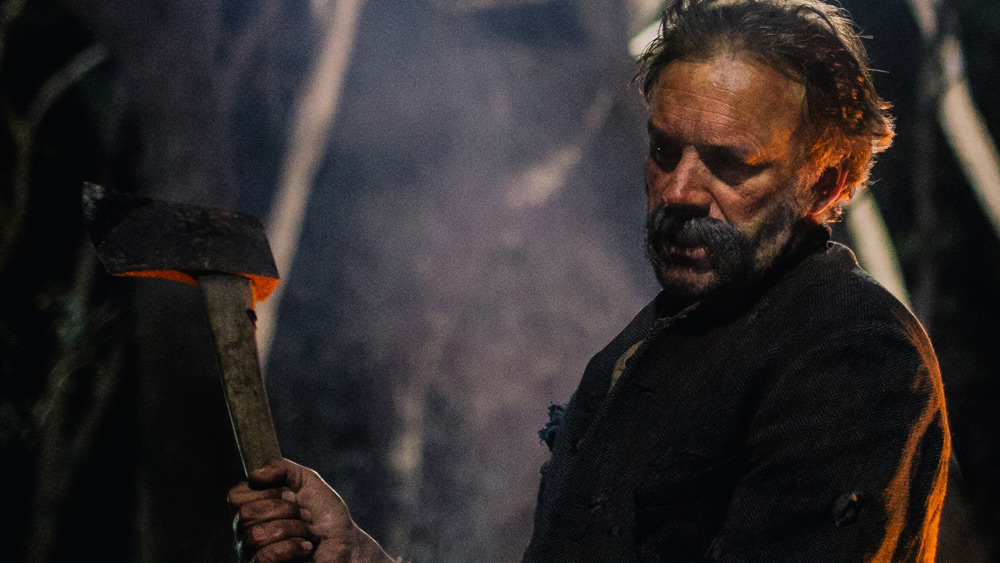 Guillaume (Dino Marnika) has to decide how to deal with his former partner and whether it should be permanent.

The sound design (and presumably, the score since a score composer isn’t otherwise mentioned) were also helmed by Alan King. Although my French is very basic, the dialogue was recorded cleanly and blended well with the rustic sound effects that were woven throughout the film. (So well integrated was everything aurally that I actually didn’t stop to wonder at the juxtaposition of a trio of French speaking gold prospectors in such a dominantly English speaking country as Australia.)

The score provided tension without being too dominant, which is a difficult task! The audio post mixing and mastering was a separate expense and one that was done very well.

$2500 for a 14 minute short that looks and sounds this good is really impressive. All their expenses were well thought out and very prudent.

This is an interesting film. Definitely one to watch a few times over, due to its tight pacing and brevity, there’s a definite suspicion that you might’ve missed something the first time through. It’s open enough that I could see it being an interesting film to show at dinner parties and discuss viewers thoughts afterwards—especially if they’re fans of historical settings like the often brutal Gold rushes of Australia. 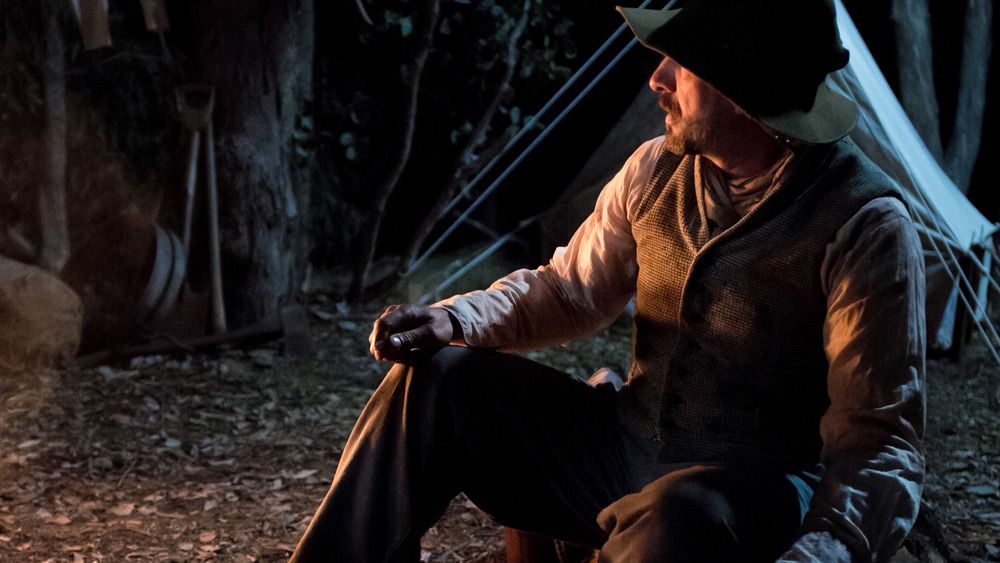 Frederic (Albert Goikhman) isn’t fully prepared for his partner’s past sins–or how that will effect him in the end.

This is really an impressive short film. I’ve done features and short films, so I know that a short can be deceptively difficult to pull off. As such, I give a strong commendation to King and his entire team. I really look forward to the next thing these guys put their minds to!