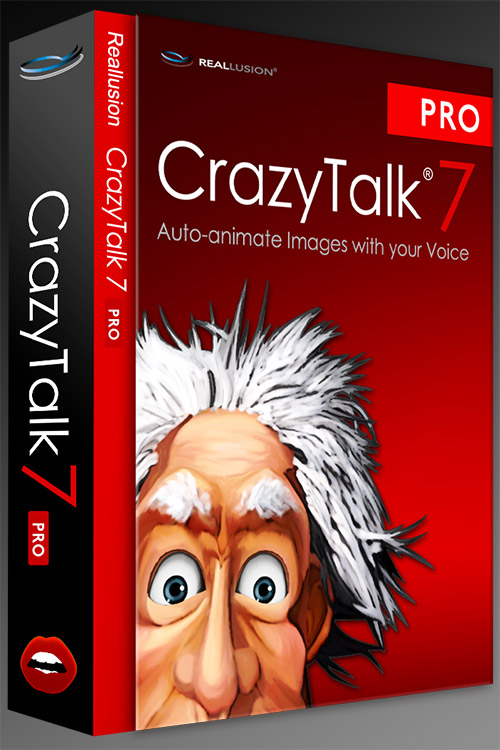 When our affiliate–the magazine for the Gothic arts community, DarkestGoth Magazine–needed a cutting edge video talk show that pushed the boundaries of microbudget creation, we looked at the notion of making it an animated show. The concept of a true talk show that’s entirely animated hasn’t really been explored to my knowledge. As we discussed this concept, we looked at different animation options that have been used for other animated shows, but all of them required a much greater force of animators that we had at our disposal.

That’s when we looked more deeply at Reallusion’s CrazyTalk7 (CT7), the smaller, older brother of the larger CrazyTalk Animator. While CrazyTalk Animator is designed for more complex 2D animations that include sets and fully animated figures, the original CrazyTalk franchise is designed to simplify animation for “talking-head”-type pieces by having mouth animation interpreted automatically off the syllables and phonemes in an audio track and applied to a mapped picture or drawing. (In past versions, the auto animation was limited mainly to mouth movement with a median level of eye blinking to go with it. In CrazyTalk7, however, the core animation is now much more robust, but we’ll get into that later.) Then you tweak auto-motion profiles (also new to CT7), adjust specific animations, and tweak individual expressions to taste. (Note: We reviewed CrazyTalk7 Pro in this review. The key differences between it and CrazyTalk7 Basic are in the amount of control you have for fine tuning and finessing the animation of your characters. For most of our readers, Pro would be the one most considered.) 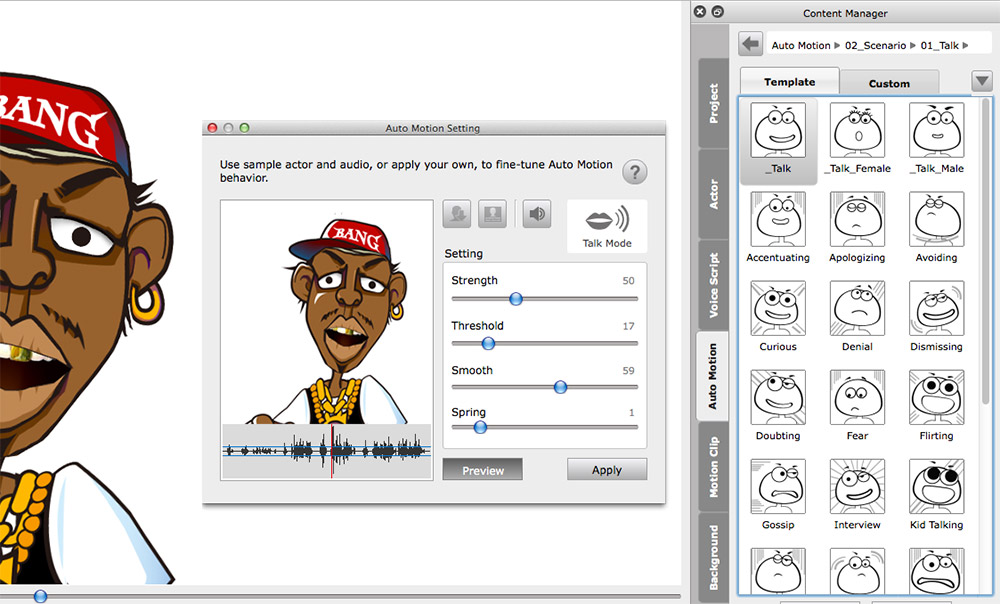 The new dockable panes in CT7 are a great way to make a workspace that’s uniquely customized to your way of working.

For the new user, CrazyTalk will have a bit of a learning curve. This is largely because, while CrazyTalk does provide tools to help you model almost any front facing image (and CT6 users will note improved options for removing backgrounds), the results will not be as polished if you don’t perform any pre-adjustment in a photo software like Photoshop or Gimp.

I found it worked best to create a cutout of the character over transparency in Photoshop, not only removing the background but also removing the actual eyeball areas. Saved as a 24-bit PNG with transparency, this gave me easy characters to map inside of CrazyTalk, without having to go to extreme measures inside the less graphically robust software. 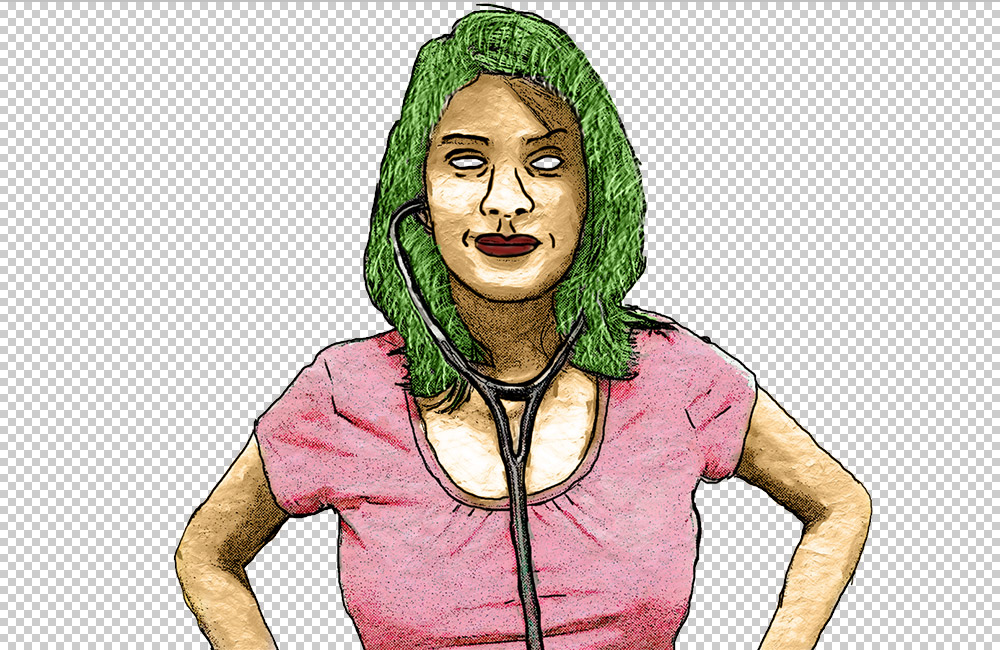 While CT7 will allow you to freeze the background from your characters, I found it more effective to cut out the character in Photoshop ahead of time.

From here, it was a simple a matter of laying out the guide overlays so the program knew where the eyelids were, where the nose was, etc. After that and some more general tweaking/layout options and background selection, you import your audio track and, right out of the box, the software can do general mouth animation to the voice track—so long as it’s clean and clear. (We tracked at Oakwood Sound Design, so had really amazing audio to work from.)

Additional adjustments could then be made to the animation, followed by final exports in a number of different formats and sizes. If you’re doing any form of multiple character animation, you’ll then take the separate shots and edit them in a nonlinear editor like Premiere Pro or Final Cut Pro.

While the overall learning curve and ease of use do make sense, I do hope that CrazyTalk8 will address an issue that is of notable concern to the microbudget content: Allow the user to easily change the timeline length AND give the options to enter this length in frames OR timecode. (I had to rummage around on the online FAQ after hours of fruitless searching for the timeline length feature. The default length is currently less than a minute, so changing this is a necessity. There’s currently no option to switch from frames to timecode, nor to go automatically to the max length of 15 minutes. [For the latter, you’ll have to do the following equation to get “Y,” which is the number to enter in the timeline frame length box. (Maximum Minutes) x (seconds per minute) x (fps) = Y. But don’t worry! I’ll let you cheat off my paper! It’s 27000 frames.]) 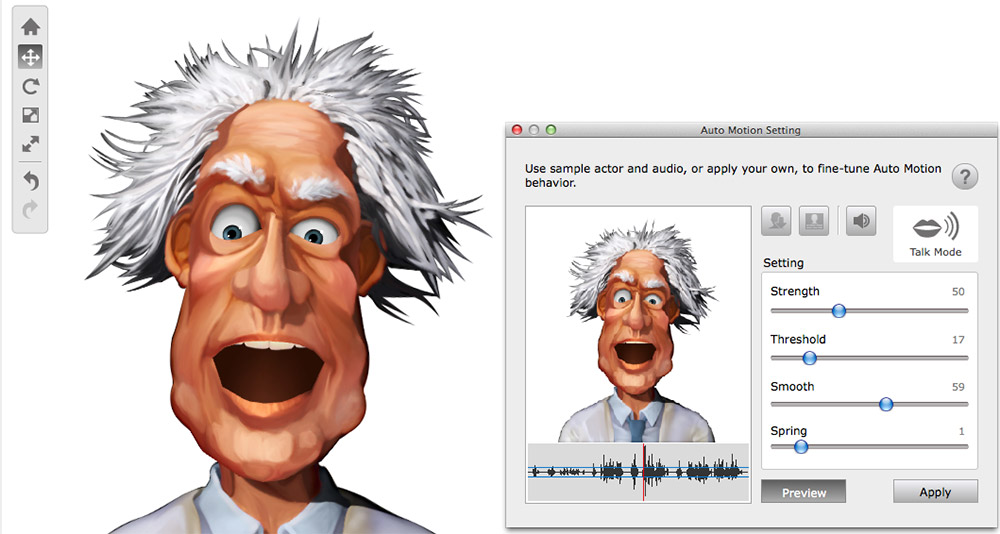 The automotion elements allow you to essentially create a physical body language for your characters, which makes them more like actual actors. (Just be aware, using more involved ones on longer scripts can result in slowdown, so you may want to add your automotion after the fact before you export.)

With the right creativity, a huge number of creative concepts are possible with this software. I found that changing the facial types from human to animated or animal shapes helped give unique styles to a character, while changing the amount of 3D animation helped customize the feel of the animation a lot.

As to the new options that are present in 7 that weren’t present in 6:

Auto audio-driven animation: As I alluded to before, one of the big things they’ve added in 7 is purely audio driven animation. This essentially means that the default body and movement animation the program will create for your character will change based on the delivery of the dialogue. To test this out, I created a test edit for the Ami & Silas show with Ami—the marginal straight man of the group—animated entirely by her vocal inflection. While the final product wasn’t as snappy as if I’d added in some custom animation, it was a pretty impressive starting place.  (Check out the clip from the show below.)

Auto motion profiles: These are essentially groupings of motions that can be added as needed and tweaked for strength options. The defaults were usually far too strong for my needs, but, with adjusting the different parameters, you could get some pretty cool sequences.

Dockable Interface: This allows you to move your editing panes around, which is a nice addition for customizing your workspace.

Things I would love to see brought back (which were removed after CT6):

1. The ability to intercut multiple characters AND audio timelines together into a single edit in CrazyTalk, without having to go into an editing software like Premiere Pro or Final Cut Pro with separate tracks. (I may still do that for more control, but it would be nice for simpler projects to be able to have dialogue flowing and to visually be able to see both parts of it in CrazyTalk.)

2. Special Effects – The ability to add in some sparkle and fun elements are present in almost every other Reallusion product from iClone to CrazyTalk Animator to CrazyTalk 6, but were mysteriously removed in CT7.

Things I would love to see for the future:

1. The option for more 2D physics, for easy recreation of the slot animation style (which is based on pop out book sliders) used by Monty Python or the face cutout styles popularized by late night talk shows (where only the lips and the eyes move fluidly, while the rest of the face is rigid). (Perhaps something like the Puppet Animation tool from After Effects, which would permit you to permanently freeze areas of a characters face—or make it half rigid in comparison to the rest of the face.)

2. A character eyeline positioning tool adjust actors general posture and default gaze. (As character model photos currently have to be looking straight forward, if you edit two character animations together for dialogue, both characters are seen looking off into space in the same slight angle—so that they seem to be ignoring one another rather than talking to each other. While you can flip the image in your video editor, this delays your rendering in your editor and doesn’t work well for backgrounds with text or other non-mirrorable content. )

Even though CrazyTalk 7 is still 32-bit software, for projects 10 minutes or less, the overall performance for CrazyTalk7 was very good and it was fairly stable on my PC with Windows 7 Ultimate, 2.5 ghz i5, 12 Gigs of RAM, and Quadro FX 5600 card. Once we got into projects between 10 minutes and the maximum of 15 minutes, especially those with a lot of sub-animation or with more auto-animation movement, we had more sluggishness creep in and had more stability issues.

Exporting out HD footage with CrazyTalk 7 is pretty fast and convenient, even at HD sizes. Because a small percentage of the actual frame is in motion in most CrazyTalk animations, in comparison to full motion recording, the file sizes are capable of being decently small in size even with low compression, while retaining a very crisp appearance.

(For additional options, CrazyTalk Animator 2, which comes out at the end of the year, is supposed to support full crossover connectivity with the models and filetypes from CrazyTalk 7. The current CTA supports model and animation transfer from CrazyTalk 6.)

Things I’d love to see in the future:

1. True 64-bit processing, so that the software can take advantage of all of the RAM available.

For $150, CrazyTalk Pro might be a bit spendy if you’re not doing a show, film, or a series of shorts with these types of looks; however, if you like the stylized animation CrazyTalk provides and would make use of it in different projects, it’s really a pretty reasonable price.

Folks who want to use more generic animations and don’t need to tweak things as much can pick up the basic version for the very inexpensive cost of $30.

If you’re on the fence as to which might be right for you, you can download the demos. While you won’t be able to save your animation in the Pro demo, you can run it through its paces and see if you come up with a style you’re pleased with. The demo will also let you export out watermarked video clips so you can check to see how it looks in your editing software.

CrazyTalk7 is not the be-all, end-all animator; but, then again, it’s not supposed to be. It’s designed for a specific type of animation and provides an impressive number of options for that style.