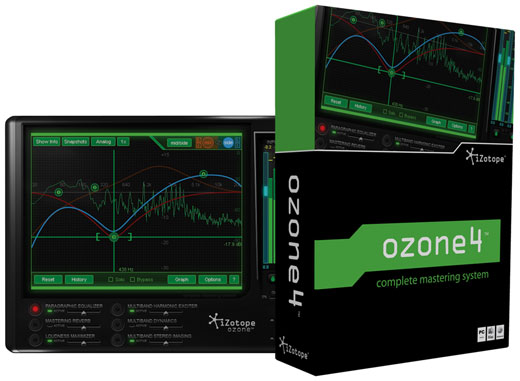 Have you ever wondered why Hollywood’s films sound so much louder than your films? Somehow, Hollywood seems to make their films loud and vibrant, without distortion, whereas, for most low-budget options, attempting to replicate that creates muddy audio that begins to distort when it gets too loud. So, how exactly do Hollywood studios do it?

Industry audio designers use high quality mastering software to achieve their professional sound. If you have done any research in this area, you know that mastering software can be expensive, so how is a budding filmmaker on a tight budget supposed to make his or her films sound more professional? This is where iZotope Ozone comes in. 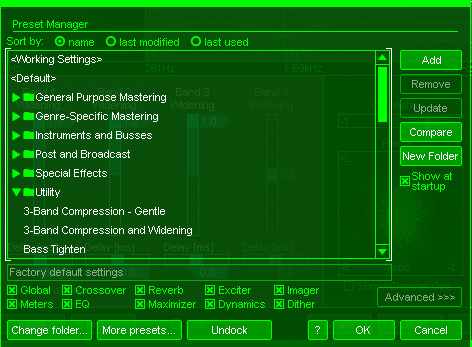 Check out Ozone’s presets before you do anything else. Scroll through your options to find what will suit your needs the best.

Ozone is a mastering plug-in, making your audio sound louder, more vibrant, and more professional. iZotope’s signature plug-in gives you access to the tools of professional mastering engineers in an easy-to-use interface.

For video people, this may at first seem to be the most confusing of iZotope’s programs, but the company does not leave their customers in the dark. To help teach those just getting into mastering, iZotope has supplied their customers with two ways of making this plug-in easier to use: lots of presets and a 64-page instruction manual on the art of mastering. The designers at iZotope have spent countless hours putting both the presets and the instruction manual together so that you could use these mastering tools yourself. 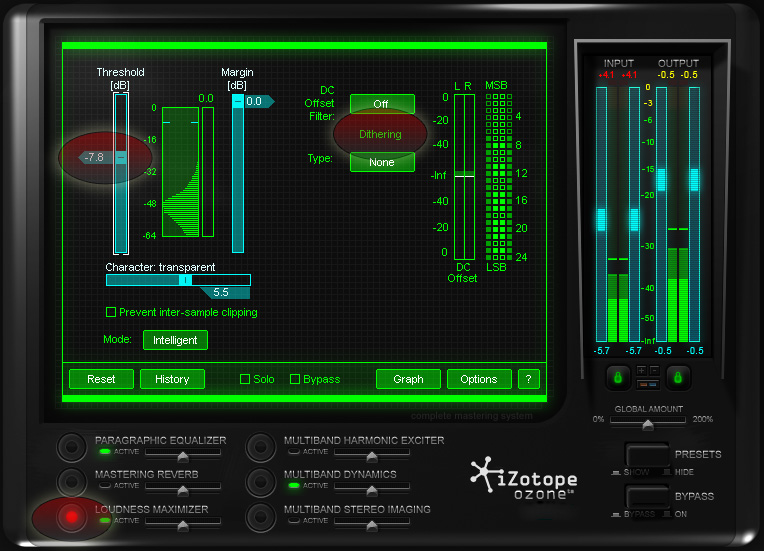 Ozone’s Loudness Maximizer gives you options to increase the loudness of your film without it distorting.

For folks with basic familiarity with audio software, Ozone is fairly easy to use. It has a user-friendly interface, typical of iZotope products. The terms used for the different processes (at the bottom of the plug-in) are not as easy to understand as iZotope Nectar, however. Some of the buttons like ‘mastering reverb’ and ‘loudness maximizer’ make sense while others like ‘multiband dynamics’ and ‘multiband stereo imaging’ are a bit more confusing. You can turn each effect on and off by clicking the button next to the word ‘active.’ This tells you whether or not your audio is processing that effect at a quick glance.

Of course, when you drill down into each mastering effect, Ozone gives you even more options, which can get a bit overwhelming. If you have never experimented with mastering before, you have a good chance of putting too much mastering on your film audio, so the key with this plug-in is to not overdo it. (I can’t recommend reading through the 64-page manual enough, as it is more of a crash course in the art of mastering, helping explain mastering to those of you who have never mastered a film. This manual is priceless in making the entire mastering process easier. What Ozone lacks in ease of use, the manual makes up for in explanation. )

For your final mastering needs, Ozone is a really great piece of software! Anything you as a filmmaker may need to master your own film is right at your fingertips. In fact, you will be hard-pressed to reach this plug-in’s limits. The depth of this program is incredible. You can choose from six different effects: parametric EQ, mastering reverb, loudness maximizer, multiband harmonic exciter, multiband dynamics, and multiband stereo imaging. 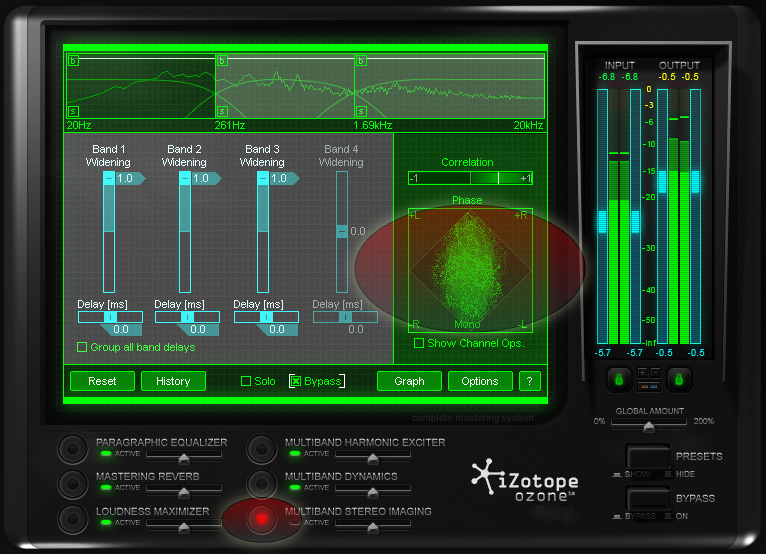 Many mastering plug-ins will give you the choice of one mastering effect, but Ozone’s access to six mastering effects is great news for the low-budget filmmaker! And if the number of effects in one plug-in doesn’t impress you, Ozone gives the novice the ability to choose from hundreds of presets, combining all six effects into one mastering preset. iZotope spent hours upon hours making these presets so that you wouldn’t have to.

Ozone will take you, the independent filmmaker, far past the “independent” sound and place you right into the professional world.

Ozone will make your film audio louder without sounding distorted. Only mastering software, such as Ozone, has the ability to perform at a level like this. It will add shine and sparkle to your mix, brightening dull film audio. And it will glue the audio from all of your scenes together to give your film a more cohesive feel. Ozone does all of these things while working stealthily in the background. You’ll never know it’s there.

Ozone performs so very well and with such stability that I can’t think of one tweak that I would make to the program. It is an all-around wonderful program to work with. 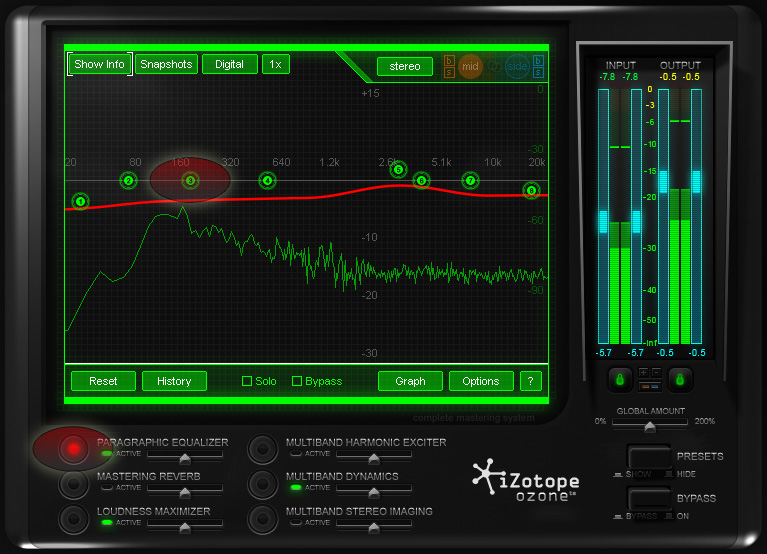 For the price that iZotope is asking, this is a great deal. For $249, you get six high-quality mastering tools in one software plug-in. You will be hard-pressed to find a mastering suite that does a better job than Ozone for the price you are paying.

You can also bundle iZotope’s products on their website (or on Sweetwater.com). If you can afford a bundle, it would be well worth your money to invest in–for example–Nectar, Alloy, and Ozone together for complete control of your film’s audio. 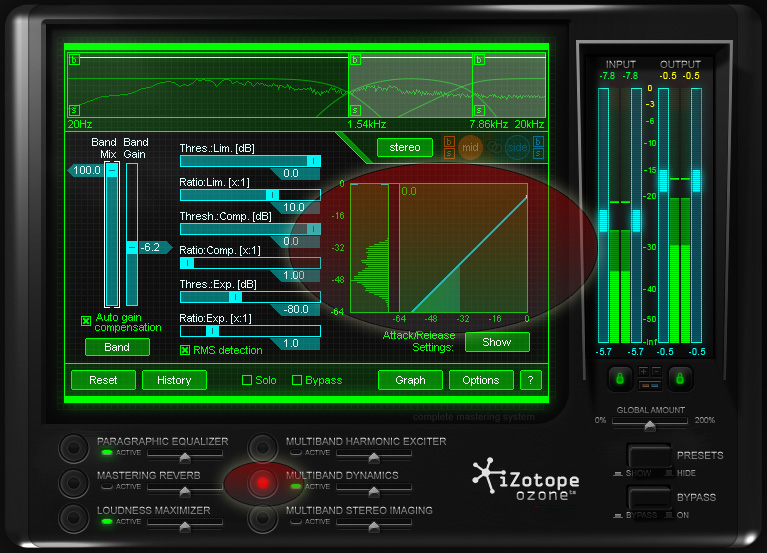 iZotope Ozone is a killer mastering plug-in, and the value of six mastering effects in one plug-in continues to amaze me. It would be well worth your money to buy this program just for the presets, especially if you simply cannot afford to pay an audio engineer to master your film. Simply using the presets with minimal tweaking will place your film in front of so many other independent films. This plug-in would benefit any filmmaker looking to make their work a step above of the rest.