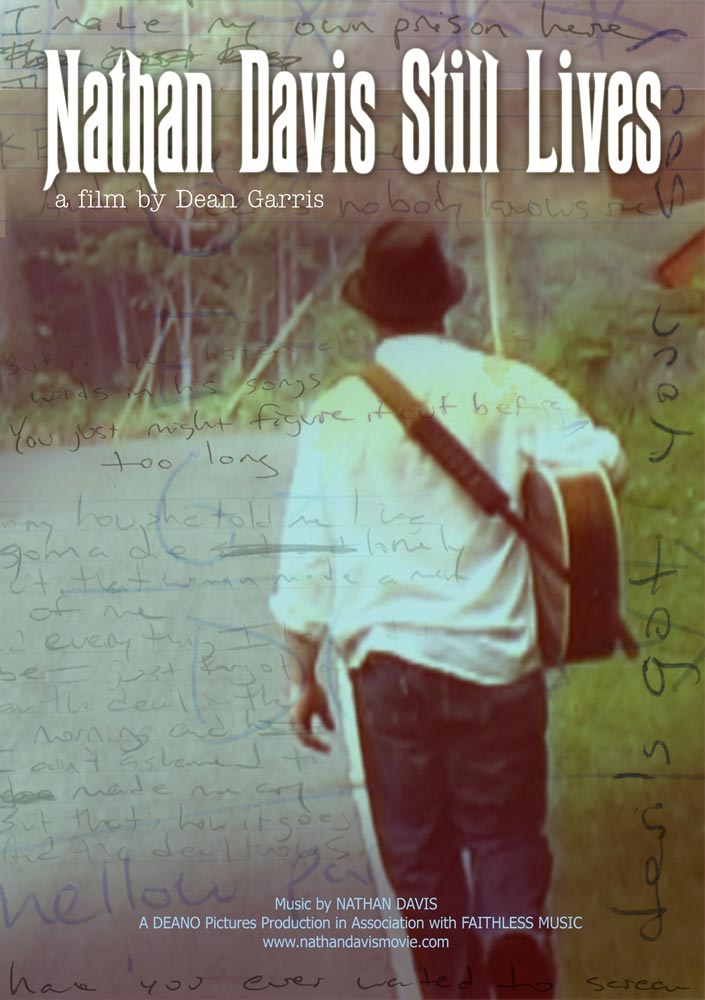 All musicians who died too young due to personal demons.

But why do we know them?

Because they managed to stay alive at least until our culture had come to revere them. However, every year, musicians no less talented die too young, but, because they were unable to hold on until their big break, they are not household names. It doesn’t make their loss any less tragic.

In that vein, filmmaker Dean Garris chose to explore the life of one such musician, a blues singer/songwriter from North Carolina named Nathan Davis. In this film, he explores Davis’ formative years, his lost love, his hustling love for music, the brink of fame and fortune that was swallowed by death, and the lasting impact he had on those whom he touched with his young life.

The overall content of Nathan Davis Still Lives is really quite good and the ending is strong and impacting.

However, while it has all the pieces necessary to make a really great documentary, they’re put in odd and confusing places or are lacking small tie-ins to have as much impact as they should. Because of this, the pacing also suffers and there are too many places to lose an audience. Fortunately, with a bit of tweaking, this documentary could be truly amazing!

The current documentary opens with a lot of people talking about having seen Nathan Davis play and how inspirational he was, without any information about who these people are, who Davis was, or even that Davis is dead. As the name of the film kind of assumes the death of the main character, even though it’s not stated definitively until the end of the film, I found myself feeling like I was eavesdropping on a random stranger’s wake, which, frankly, isn’t very pleasant.

In web design, there’s a saying that if you haven’t hooked your viewer in 10 seconds, they’re gone. While filmmakers get a little longer than that to hook a new viewer, it’s reported that within 10 minutes of watching a new film, people will decide if they care enough about the characters to keep watching. That’s why most Hollywood films try to start with a really powerful, dramatic, or intense scene to pull you in.

An opening hook can look like a lot of different things in a lot of different films. In action films, this is often starting out the film with a daring robbery or an adrenaline packed gunfight, knowing that people will be pulled viscerally into the story by the suspense and then want to know more about the characters. (It could also be a universal scene like the beginning of Face/Off where a coldblooded killing leaves John Travolta holding his dead son on a merry-go-round.)

In biographical documentaries, unless the subject is someone who is a nationally recognized and speculated about figure (like Elvis or Curt Cobain), it’s not possible to use suspense to pull people in.

To get around this issue, it’s necessary to put in a very targeted emotional hook to elicit empathy between the audience and the main character. In the book The Golden Principle, Brian McDonald states that the most fundamental message one can use to connect people to a work is to show that we’re all the same. This doesn’t mean to make the person non-unique, but, instead, the audience must feel emotionally connected to the individual to care about his uniqueness. If they feel connected to the character, they care about their story. (One need only think about how we deal with our friends when bad things happen to them. Even if they are self-inflicted tragedies, we’re willing to listen to them because of our relationship. At the very least, we won’t brush them off, because we don’t want to offend them because we care about their feelings. Most people aren’t willing to extend that same courtesy to a stranger who is saying the same things on a street corner because they don’t have an emotional connection with them.)

Here are my suggestions for correcting some of these issues with Nathan Davis Still Lives:

As much as people seem to hate both title cards and narration these days (despite how successfully they’ve been used in documentaries since the dawn of time), you have to use something stark that let’s people know that Nathan Davis:

2)where he was from

3)that he tragically died

4)that he made an impact

My thought would be to start with a black screen and some softly muted music from Davis. In white writing (allowing enough time for it to be on the screen for you to read it through three times, so that slower readers will get all the way through it), put a brief title card overview of these elements. One possible layout might be a variation of this critique’s opening, like:

“Hendrix, Joplin, and Cobain. These names immediately strike a chord with a massive audience who associate brilliance with a flame snuffed out too soon! However, each year, hundreds of brilliant independent artists flame out and die, their loss even more tragic because they died just before becoming a cultural icon.

This is one such tale…about a singer/songwriter in North Carolina named Nathan Davis.”

After that, cut into short montage of clips from his concerts and people talking about his impact on their lives, but restrict these to people who have direct connections to Davis and use titles that show their connections. (ie Nathan Davis’ Mother; Nathan Davis’ manager; Former band member from Nathan Davis’ first band; etc.) As Nathan Davis was apparently all about fearless self-promoting, there’s nothing incorrect about bringing every interview into focus with how these people were related to or impacted him directly (and it makes the audience care far more).

Currently, much of the movie kind of jumps around a lot in its focus, jumping from different subject mattes to concert footage from different points in his career. In addition to a very disjointed journey, it also leaves people being heavily interviewed in early areas of the documentary that you don’t meet or find anything about until halfway through or, in some cases, almost the end.

My recommendation would be that, rather than jumping around from different parts of his life, follow a more sequential basis that goes through his biography and introduces these individuals that were in the introduction portion sequentially, as well. While it’s not necessary to use a narrator, many music documentary do, because music documentaries are about the audio experience so having a narrator does make sense. Regardless whether that is employed, considering this is a story about a musician with tragic elements of his life informing different decisions and paths, there’s nothing wrong with borrowing the structure that VH1’s Behind the Music uses. After all, this is a format that viewers are already familiar with and is an excellent example of building biographical information toward the tragic twists that propel them to the next stage of their life and death.

As such, after the overview title card, intro interviews, and the film title card, it would make the most sense to follow his biography sequentially, starting with where he came from, his home life, his hard time in church, his life on the road, his tragic breakup with his life love—Holly, his engagement and marriage to a new woman, his recording work, the birth of his daughter, his divorce, his final tour, and his death. At this point, in retrospective manner, move on to how his fans discovered him and what he meant to their lives. Then conclude with the current ending, which explores the lasting impact he has had and how people buying his albums help support his daughter. Sequential concert footage can then serve as the chapter headers between each of these segments.

The overall look of this film was quite accomplished and really did look like a music documentary. While there were a few issues with soft focus at times and a couple of overly “framed” looking interviews, most of the camera shots and angles were well composed, retaining a gritty and low-fi feel which fit the documentary nicely.

The actual editing of the film was done thoughtfully and worked well, as well. The one thing I would say as far as look goes is that the titles of the interview subjects needed to have either a drop shadow or a lower-third background, so that they would be easy to read when the titles ran across combination light and dark backgrounds.

The actual interview dialogue in this film was pretty good. While there were a few odd issues depending on the location, things sounded correct and well-recorded for the most part. (The team used a pair of lavs and an Audio Technica boom mic to get good audio on location, which is a good idea for redundancy in interview situations.)

The latter music in the film sounded pretty good, but the early music had some overall production problems. While this is undoubtedly true with most original music from singer/songwriters, it does need a little cleanup work to feel fitting.

Fortunately, there is a $40 package that does a surprisingly good job of cleaning up music from the company iZotope called Music and Speech Cleaner. In addition to being able to add some nice punch to music (without you having to go through and do an in-depth mastering procedure), it also can help clean out background noise which would help a number of songs that had bustling noise that approached the “white” noise spectrum. (Of course, some things are hard to clean up like the song, Devil, through which the filmmakers explore how creative Davis was, but, then, when he sings it, we hear a bunch of people talking fairly distractingly nearby. While Music and Speech Cleaner would help with this area, to fully eradicate that would probably take iZotope’s RX/Advanced Spectral cleanup tools.)

Considering the amount of travel that was required throughout the south to shoot this film (and that it actually includes the festival and marketing fees which we don’t actually consider), $6500 is an excellent price for this film.

Folks who sit through the entirety of this film will find some really charming elements to it and find themselves exposed to a very intriguing new musician and his work. However, the rambling nature of the film which takes too long to connect the audience with the main character degrades the initial appeal quite a bit.

Nathan Davis Still Lives has some amazing elements to it and tells the story of a very fascinating singer/songwriter. As such I really hope that the filmmaker considers reworking the content in such a way that more people will get pulled into this young man’s story and follow it all the way to the end! I really look forward to future films from Mr. Garris, because I think his heart to look at these sorts of stories is really welcome, especially in a world that is growing more and more tired of mass produced musicians!